In this thesis three distinct granular systems with an intruder were described. ‘From various experiments, we were able to relate macroscopic behaviour to new microscopic details,’ Loreto Oyarte Galvez says. ‘In the case of a build-in rotor - immersed in a granular gas - we succeeded in creating a model that fits the experimental outcomes very well.’

This work resulted in a ‘full and complete story’ which was successfully published in the Journal of Statistical Mechanics: Theory and Experiment. Loreto: ‘Existing models were not capable of describing the experimentally observed angular velocity distribution satisfactorily. Incorporating the effects of external friction and collision rate - experienced by the rotor itself - into the model, led to full agreement with our experiments.’

Another system involved an impact study, and settling, of a sphere in a suspension of corn-starch. Here, the suspension rheology was strongly altered when the suspensing fluid was gradually changed from pure water to pure ethanol, changing it from a shear-thickening fluid into its opposite: a shear-thinning one.

In the third system, the behaviour of a particular granular Leidenfrost state was studied, in which a denser region of grains floats on top of a dilute one. A wide range of parameters was observed in an extensive experimental setup.

The low-frequency oscillation was characterized thoroughly. ‘Unlike the other two systems, no external object was introduced here,’ Loreto says. ‘The intruder was generated by the system itself. The granular bed behaves very fluid-like, but the actual mechanics underlying the phenomena are very different. We collaborated on this subject with Nicolas Rivas from the Multi Scale Mechanics Group, led by Professor Stefan Luding. The results from the simulation experiments we collaborated on, served as input for the actual experiments.’

Loreto enjoyed working on the experimental setups which formed the main ingredient of her PhD work. ‘The setups were quite big, involving large energies,’ she says. ‘It is great the facilities at Mesa+ are present to perform this kind of decisive experiments, finally leading to new theoretical insights.’ 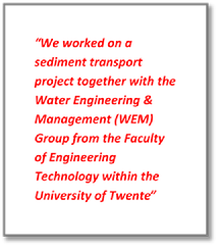 During the four years of the PhD project, Loreto gained more confidence and intuition within the research field, as well as performing like an overall scientist.

‘From the third year on, I felt confident to create my own ideas and take initiative in developing a complex project on my own, pursuing new results,’ she says. ‘For example we worked on a sediment transport project together with the Water Engineering & Management (WEM) Group from the Faculty of Engineering Technology within the University of Twente. Our expertise proved worthwhile for evaluating the performance of a new kind of sensor. We initiated this project with Leonardo Duarte Campos from WEM and in collaboration with these colleagues we were happy to come up with appealing and publishable results.’

After her PhD Defence, Loreto will be working as a post-doc at the University of Twente for the next 1,5 years. Next to granular and microfluidic topics, she will collaborate with Professor Devaray van der Meer from the Physics of Fluids Group and with Assistant Professor David Fernandez Rivas of the Mesoscale Systems Group.

Loreto: ‘The focus will be more application oriented as was my PhD work. Maybe in the future some spin-off ideas result from this work. By working on these post-doc issues, I hope to open my mind as to how it is like to work on more commercial and practical subjects, and to get a sense of how it is to work in industry one day. For now, I strongly favour a career in academics. But one can never tell what the future holds.’