The aim of this work is to understand scientific challenges in enhanced oil recovery (EOR). Charging behavior and ion adsorption at solid-liquid interfaces are investigated. Surface charge properties of rock/clay surfaces play an important role in understanding various fluid-rock/clay interactions in oil reservoirs.

‘Two types of clay minerals are leading in natural sea rock formations,’ says Naveen Kumar. ‘The morphology and charge characteristics of kaolinite and mica are distinguished in this research; the 1:1 and 2:1 layer types.’

The last chapter of his PhD thesis, chapter 6, Naveen Kumar values as deciding. Here a model was developed to represent a rock-oil-salt system in an oil reservoir . The adsorption and desorption of model oil to a model rock surface was investigated. Langmuir-Blodgett (LB) films of stearic acid (representative of polar organic components of oil) were deposited on silica, in the presence of Ca2+ and/or Na+ ions. 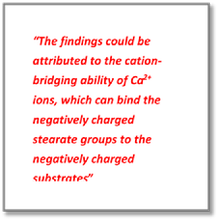 ‘Large differences in macroscopic wettability (contact angles) were observed between the monolayers prepared in Ca2+ and Na+ ions sub-phases,’ says Naveen. Both contact angle and AFM imaging experiments revealed that the Langmuir Blodgett films prepared in the presence of divalent ions (Ca2+), are more stable in comparison with monovalent ions (Na+). 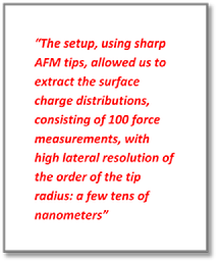 Naveen worked within the Physics of Complex Fluids Group, led by Professor Frieder Mugele. In former projects important experimental expertise was built up in this Group already. An advanced setup was worked out and already available, combining frequency oscillation and amplitude measurements using sharp AFM tips.

‘As a result we were able to look into our samples in considerable detail,’ Naveen says. ‘The setup, using sharp AFM tips, allowed us to extract the surface charge distributions, consisting of 100 force measurements, with high lateral resolution of the order of the tip radius: a few tens of nanometers. These findings were a major step towards the nice end results that we were able to present.’

The PhD project was in collaboration with British Petroleum. ‘The half-yearly progress meetings were inspirational. The input we gained from these, allowed us to confirm the progress we made and steer the project in order to come to valuable results, both scientifically and for company use,’ Naveen says. 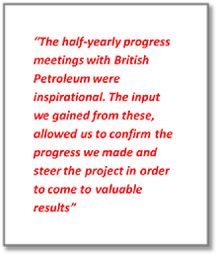 Naveen appreciates his personal progress as an experimental scientist, and his experiences studying phenomena on nanoscale that are of relevance for daily practice. He spent time in the Mesa+ cleanroom, for scanning electron microscopy measurements for characterizing the AFM tips, which have to be ultraclean before and after being used in characterization measurements.

‘Now I am working as a post-doc at the TU Delft,’ Naveen says. ‘This project is related and similar to my PhD work at Twente. Also here, oil recovery is the central theme, although higher temperatures and pressures conditions are at stake. After the post-doc I would like to work in industry, as I would like to contribute to real problems and actually see the effects of my work. At this very moment I am very curious how BP will use my PhD findings, and I will certainly follow that process.’