This thesis focuses on the sudden reduction of the heat transfer rate in the context of spray cooling: a remarkable phenomenon occurring at strongly elevated plate temperatures, above the saturation temperature of the liquid spray.

‘As soon as the Leidenfrost phenomenon is present, the contact between liquid and a hot plate disappears,’ Michiel van Limbeek explains. ‘An insulation layer prevents the droplets from touching the plate, preventing an efficient exchange of heat. A better understanding of the details on wetting behaviour and bubble generation, at the interface between the heated plate and the liquid drop, sheds light on this undesirable phenomenon.’

A new boiling regime was found to exist and was described, in which the drop only partially contacted the wall (or plate). The impact dynamics in the early stages, were proven to determine the boundary temperatures of this new regime and the Leidenfrost regime.

A second ‘touch-down mechanism’ was found, in which the heat transfer towards the evaporative front was limited in the case of a poor thermal conducting plate.

‘The findings on the mechanisms studied in this PhD work, may help to optimize efficient cooling processes,’ Michiel says. ‘Especially where spray cooling is at play, at very high process temperatures. One can think of: combustion engines, insulation in rocket propulsion engines, and cooldown procedures in steel production facilities.’

Though his research field is applicable in ‘serious business processes’, Michiel’s personal drive primarily lied in the scientific research goals to be reached. 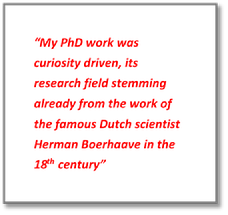 ‘My PhD work was curiosity driven, its research field stemming already from the work of the famous Dutch scientist Herman Boerhaave in the 18th century,’ he says. ‘It puts my research in a historic tradition wherein generations of scientists were motivated for centuries, to really understand the fundamentals of Leidenfrost related phenomena.’

While studying literature - in which several publications seemed to lead to paradoxical outcomes – and systematically presenting his experimental results - and ‘drawing’ several phase diagrams - Michiel was able to conclude a ‘transition regime’ to exist. 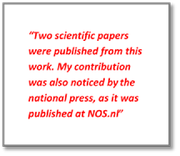 ‘It contributed to the existing literature, at both the high end and low end of it,’ he says. ‘Two papers were published from this work. My contribution was also noticed by the national press, as it was published at “NOS.nl”. Being published in the same edition in Physical Review Letters as was the ground-breaking observation of the first gravitational waves, early 2016, led to extra attention for my work, by the physics new portal “Phys.org”. This proves my research topic is appealing to the public. This was a great moment during my PhD project.’

Michiel is happy the chapters in his PhD thesis have a great consistency. ‘It has become one coherent story. The aspects of research are centred around four keywords contributing to the Leidenfrost principle as its core theme.’

‘As a future job I prefer a career in academics. In industry, financial incentives may serve as arguments to stop research lines altogether in an ad hoc fashion, as a result of higher management decisions. That is the reason why I prefer the freedom of scientific research, although this career choice is likely to be less attractive financially. After my PhD Defence I hope to find another heat transfer problem as research theme, since this field has a rich variety of physical processes at play.’

During his four year’s PhD, Michiel developed himself towards an independently working scientific researcher. 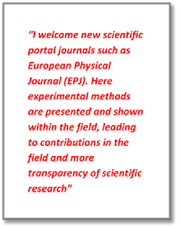 ‘My work evolved towards a higher level in which I felt confident to create hypotheses in my research field as, by experience, I gained more insight in valuing the relevant parameters at stake. This deeper knowledge allows one to make progress in research, even when some essential voids in knowledge do still exist. Following scientific methods and using one’s intuition, progress is made. That’s why I welcome new scientific portal journals such as European Physical Journal (EPJ). Here experimental methods are presented and shown within the field, leading to contributions in the field and more transparency in scientific research.’