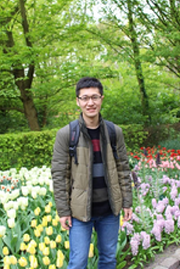 In this thesis switchable friction and adhesion is studied. Stimulus responsive end-anchored polymers forming a brush, are used.

‘We can make smart systems, composed of polymers, that respond to changes in the environment such as temperature, light, pH, etc.,’ says Yunlong Yu. ‘Solvents play an important role, since they induce the change in the polymer’s conformation, allowing them to be switchable by changing the surrounding environments.’

Atomic force microscopy was used to study the relation between the degree of solvation of the macromolecules in the brush, and their friction and adhesion. ‘We found subtle friction/adhesion behaviour when the brushes collapsed or got swollen,’ Yu says. ‘The relation proved rather complex, depending on specific interactions in the contact.

Tribo-mechanical properties were studied of thermally responsive poly(N-isopropyl acrylamide) (PNINAM) brushes. By varying the temperature below, around and above the lower critical solution temperature (LCST) of PNIPAM in water, switchable friction and adhesion properties between the brush and a gold colloid were obtained.

In contrast to the general believe, the friction was not found to be maximum above the LCST, but exactly at the LCST. This turned out to be induced by stretching of the partly collapsed polymers. ‘For PNIPAM brushes in solvent mixtures, the response became even more complex,’ Yu says. ‘Surprisingly, maximum friction was observed in 10-90 vol% ethanol-water mixtures. Also this phenomenon could be attributed to the stretching of partly collapsed polymer brush chains. These results have important implications for developing polymer-based tribo-mechanical switch systems, such as smart tweezers or artificial muscles.’ 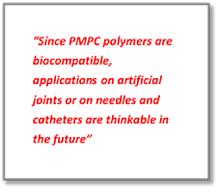 Moreover, the adhesion of the highly interesting PNIPAM brushes was measured due to the co-non-solvency effect in which the brushes are swollen in pure solvents, and precipitate in specific mixtures of co-solvents. ‘The method is feasible for nanoparticle transfer,’ Yu says.

Another main result of the PhD-work Yunlong Yu is excited about, concerns a new and facile method to make zwitterionic poly(2-methacryloyloxyethyl phosphorylcholine) (PMPC) brushes, using a poly(glycidyl methacrylate) (PGMA)-based macro-initiator.

The brushes showed a very long-time stability in pure water and in salt solutions. ‘This quality makes them a favorable candidate for future applications where long-term stability is of critical importance, such as in the human body,’ Yu believes. ‘Since PMPC polymers are biocompatible, applications on artificial joints or on needles and catheters, are thinkable in the future. Stable PMPC brushes are crucial for application in biomedical engineering.’ 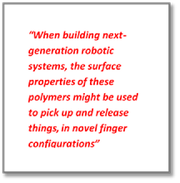 ‘My work was experimental and fundamental in nature,’ Yu says. ‘But lots of other applications are possible. For example when building next-generation robotic systems, the surface properties might be used to pick up and release things, in novel finger configurations. Also in robot cars, street surface properties might influence or control the speed of these vehicles, forcing them to slow down or making them stop by a light signal.’ 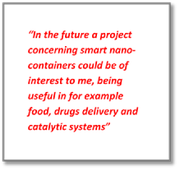 Yu favors a career in academics above one in industry. ‘During the PhD work, I collaborated a lot with our neighboring colleagues,’ he says. ‘I liked working at Mesa+ very much, discussing my work with many colleagues and during the Mesa+ Days, in one of which I was a poster prize winner. I was happy to bring my work under the attention of so many colleagues.’

Yu: ‘In the future a project concerning smart nano-containers could be of interest to me, being useful in for example food, drugs delivery and catalytic systems. One day I hope to return to China and use my research skills to contribute to the development of my home country.’