This thesis was aimed at developing novel technologies for functional micro- and nanofluidic devices, as well as exploring the functionality of first examples of such devices.

‘In all cases the use of cleanroom technology was indispensible,’ says Wesley van den Beld. ‘A first method describes graphene synthesis based on copper foil, and transferring it to an insulating substrate. The quality was characterized using Raman spectroscopy.’

Special attention was given to electrochemistry on graphene, a fairly new field of research. Graphene’s high surface area, its high electrical conductivity and low interfacial capacity, are strong advantages.

‘We strived to better understand and improve the performance of graphene for electrochemical applications and energy storage,’ Wesley says. ‘For example, Raman spectroscopy, once again, proved a valuable tool to obtain in-situ information on adsorbed species on graphene. It may serve as a competitive sensing tool for DNA micro-arrays one day.’

Further, ionic transport through graphene nanopores was studied. ‘Solid state nanopores have a large field of applications,’ Wesley mentions. ‘For example, because of the small size of graphene nanopores (around 1 nm) and the thinness of graphene membranes, these might be useful for DNA sequencing. Graphene can be used as an ultrathin membrane because of its mechanical strength. It could improve various sensor and filtration processes.’ 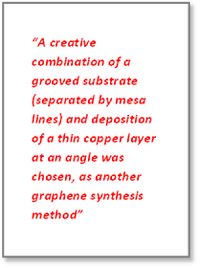 In this work yet another graphene synthesis method was presented: direct synthesis on silicon oxide without the necessity of intervening manual steps.

This was done by the dewetting process, Wesley explains. ‘A creative combination of a grooved substrate (separated by mesa lines) and deposition of a thin copper layer at an angle was chosen. The substrate was then treated by a typical graphene chemical vapour deposition synthesis process, at elevated temperatures. Graphene was deposited on the mesas in between the grooves.’ 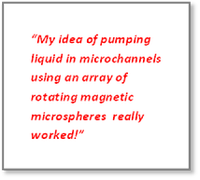 In the last chapter of his work a novel, flexible and programmable method was developed to pump liquid through microchannels in lab-on-a-chip systems, without the use of an external pump. This principle was based on an array of rotating ferromagnetic Janus microspheres around permalloy disks, driven by an external rotating magnetic field.

‘Actually seeing the liquid starting to flow, was a very special moment during my PhD work,’ Wesley says. ‘My idea of pumping liquid in the microchannel using an array of rotating magnetic microspheres really worked!’

Wesley: ‘Another special moment was when working on the dewetting method for graphene production. Crucial here is the combination of substrates with alternating grooves and mesa lines together with deposition of a thin copper layer at an angle. Realising the latter to be an essential step for directional dewetting, was a true eye-opener.’ 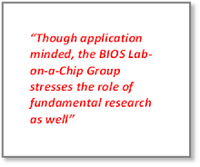 During the project the role of various methods in characterizing graphene properties, such as AFM, Raman spectroscopy and electrochemical measurements, became the more evident.

‘In this work a lot of disciplines are involved,’ Wesley says. ‘Though application minded, the BIOS Lab-on-a-Chip Group stresses the role of fundamental research as well. In my work the electrochemical phenomena on graphene layers became a major topic. I owe a great deal to Mathieu Odijk and Wouter Olthuis on this aspect.’ 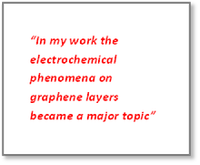 Wesley enjoyed engineering on new equipment entering the NanoLab, during his PhD project. ´No fixed recipes existed, to really explore the full functionality of this apparatus,´ he says. ´We succeeded to broaden the potential step by step, which I enjoyed very much so. In a postdoc project within the XUV Group I am happy to work on this further, while investigating new fabrication techniques for membrane devices in next generation wafer stepper machinery for ASML. Fabricating and testing these devices will be done in collaboration with other universities. I guess this new postdoc job is the best of two worlds, combining freedom of research, that is typical for academics, and application oriented research as is current in industrial research. As long as exciting research questions are leading, I am challenged and motivated to come to good results.´