‘As a member of the Catalytic Processes and Materials Group, we collaborated with other groups within Mesa+: Soft Matter, Fluidics and Interfaces (SFI) and Physics of Complex Fluids (PCF). It reflects my personal drive: requiring maximum effect by working multidisciplinary, out of my comfort zone, really challenging myself.’

Reactors were fabricated by growing carbon nanofibers (CNFs) throughout the inside wall of hollow fibre membranes, and depositing Pd nanoparticles on them. The outer walls were coated with polydimethylsiloxane (PDMS) to avoid water permeation.

A membrane reactor was fabricated to obtain high surface areas and a good gas-liquid contact interface. It was demonstrated that the selectivity towards nitrogen was enhanced. Further, it proved that Pd loaded CNFs were successful: full CNF coverage resulted in high nitrogen selectivities.

Further, a nickel ‘hairy’ foam catalyst - consisting of a thin layer of CNFs covering a nickel foam - was synthesized, characterized and tested in nitrite hydrogenation. Here catalytic activity was attributed to the nickel particles generated during the CNF growth.

At last, a microreactor was designed and fabricated to perform the catalytic decomposition of H2O2 inside a model catalyst pore. The behaviour of gas products was investigated during three-phase catalytic reactions. Bubble formation suppressed the reaction rate if it physically blocked the diffusion of H2O2 to the catalytic active sites. In contrast, bubble formation enhanced the reaction rate if bubbles migrate, creating a convective flow that accelerates H2O2 transfer towards the catalyst. 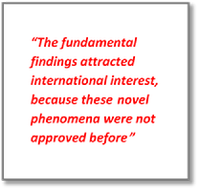 ‘For several months we struggled on fabricating nickel based hollow fibers for the membrane reactor,’ he says. ‘When using aluminium-based fibers with nickel particles deposited on them, carbon nano fibers were growing successfully without the structure breaking up. This sudden, contra-intuitive change of approach, speeded up the PhD process considerably, leading to two publications within a few months time.’

Though application oriented, a fundamental part of his work led to another memorable moment. ‘The effects of bubble forming proved important, to understand key catalyst pore processes such as wetting,’ Roger says. ‘The findings attracted international interest, because these novel phenomena were not approved before. These fundamental aspects became a main part of my thesis work.’

During his PhD work Roger expanded his skills in several directions. As a master student he was mainly focused on chemistry and materials preparation. Now reactor fabrication techniques, fundamental physics processes and complex chemistry analyses became part of his skills.

Roger: ‘Apart from collaborating with two other Mesa+ groups, also I have built up skills using Nanolab equipment such as SEM, TEM and XPS. Further, in studying the catalytic processes in the pores of the membrane walls, the collaboration with the Lab-on-a-Chip experts was indispensible. In order to successfully investigate these processes, a novel transparent chip had to be designed and actually fabricated. I was very glad the expertise to do so was present within Mesa+.’ 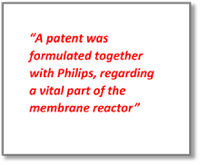 Roger: ‘I love the application side of research, as I already experienced during my PhD project. A patent was formulated together with Philips, regarding a vital part of the membrane reactor.’ 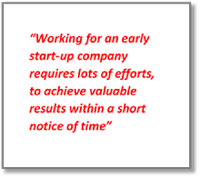 ‘At Eurekite I hope to continue the challenging and multidisciplinary approach towards research. Working for an early start-up company requires lots of efforts, to achieve valuable results within only a short notice of time. There is a real need: we will have to make this new technology work, make it grow, launch a first working product. Otherwise we won’t survive this start-up stage. Being at the beginning of a successful company would be a very rewarding experience.’