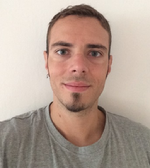 In this thesis, novel computational tools were developed to simulate structural relaxation of molecular systems following photo-excitation: light electronically excites the system, which might then undergo significant geometrical changes in the excited state. When this process occurs in a complex protein environment, it is necessary to understand how to model the coupling of the active site with its surroundings, starting from the primary step of light absorption.

This finally resulted in the computation of absorption properties of a realistic photobiological system. ‘Here, a large molecular “antenna” is embedded in a protein,’ says Riccardo Guareschi.

Photoinduced processes play a fundamental role in the function of many biological systems. Computer simulations can be of great help to understand the molecular mechanisms underlying the excited-state behavior of bio-molecules. Riccardo: ‘Novel modeling techniques together with the availability of big computational facilities, lead to robust predictions for such complex photosensitive systems.’

Using sophisticated approaches developed within the group of Professor Claudia Filippi, the excited-state geometry relaxation of prototypical molecules in the gas phase was first investigated. ‘This led to a publication already in the first year of my PhD,’ Riccardo says. ‘Strengthened by these results, we proceeded with the simulation of more complex molecules in solution and, ultimately, in biosystems.’

As a next step, hybrid quantum-in-classical schemes were introduced, combining these accurate quantum methods for the active region with a classical description of the protein in terms of charges and polarizable dipoles. ‘This led to superior results when compared to current quantum-in-classical multiscale models that are widely used in the literature but are much more limited,’ Riccardo says.

These flexible tools allowed the accurate inclusion of electrostatic and induction effects and generally led to an improved description of a photoexcited molecule surrounded by a solvent. In the simulations, it was shown that multiple sets of dipoles were needed, separately equilibrating with the states involved in the electronic transitions, to achieve the desired accuracy.

Finally, the approach was used to study light absorption in the photoreceptor protein, rhodopsin, where the role of intrinsically quantum interactions between the light-absorbing retinal and its protein pocket was investigated. 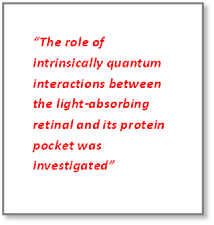 ‘We argued that non-classical “resonant” interactions between the retinal and the protein environment are important here,’ Riccardo says. ‘When this effect was accounted for together with the electrostatic response of the environment to the electronic transition, we obtained excitation energies in very good agreement with the experimental absorption maximum of rhodopsin.’

The modeling work and subsequent realistic simulations led to three publications (and a fourth paper recently submitted) in high impact journals, showing that the work of Riccardo was well-received within the scientific community. 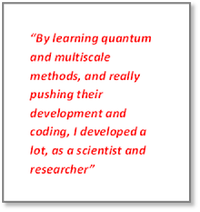 ‘By learning these quantum and multiscale methods, and really pushing its development and coding, I developed a lot, as a scientist and researcher,’ Riccardo says. ‘Also I learned how to attack complicated problems, working resiliently and discussing with colleagues and experts about possible solutions. I became more confident, and this process also enabled me to really improve my communication and presentation skills. Claudia Filippi supported me on a daily basis on this path.’

Riccardo is not sure yet as to his future plans. However, he is sure that this modeling and simulation approach might significantly contribute to medical science one day.

Riccardo: ‘I hope to bring these notions, for example, into the field of new drug delivery strategies and designs. The last chapter of my thesis - shedding new light on the nature of interactions in photoreceptor proteins - proves that it can be done.’