In this dissertation, a combined thin film growth and quantum transport study on superconductor/topological insulator (TI) hybrid devices was performed.

Careful preparation of TI thin films and their interaction with other materials, such as superconductors and ferromagnets, is needed before TI’s can be implemented into novel electronic devices. This understanding may pave the way to create and manipulate Majorana zero-energy modes one day, which can be used as building blocks for quantum bits. TI’s also have potential future technological applications in the field of spintronics.

Lastly the Josephson physics for hybrid devices of superconductor/topological insulator Josephson junctions (Nb-Bi 2Te3-Nb) was studied. Prosper concluded: ‘It is imperative to use ultra-thin samples with quantum spin Hall effect behavior, in order to reach single channel regimes. This is needed to detect Majorana zero-energy modes in the future.’

During his PhD period, in 2015, Prosper Ngabonziza - originally from Rwanda - was jointly nominated by the African Institute for Mathematical Science (AIMS) and Robert Bosch Stiftung to attend the prestigious Lindau Nobel Laureate Meeting. This meeting brings together Nobel Laureates and the next generation of leading scientists. 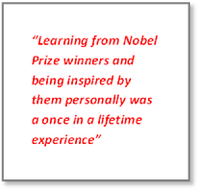 ‘This was a very honorable invitation,’ Prosper says. ‘Learning from and being inspired by Nobel Prize winners personally was a once in a lifetime experience. I hope in the future many other African researchers will be inspired this way.’

Different Nobel Laureates shared their inspiring stories that brought them to obtaining the Nobel Prize. Prosper: ‘One particular advice that most Laureates gave us, is that the key to success in science is first to have passion and devotion to what one is doing; and then keep improving with a heart of learning. Then, one day, your work will prove fruitful.’ 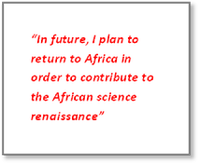 Prosper accepted a post-doc position at the Max Planck Institute of solid state research in Stuttgart, Germany. ‘This opportunity will prepare me for my future carrier in science,’ he says. ‘Also it will help me to improve my engineering skills involving thin film growth and characterizations, nano-fabrication and quantum transport measurements. In future, I plan to return to Africa in order to contribute to the African science renaissance.’ 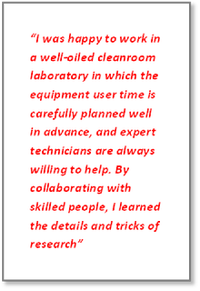 ‘Other Mesa+ groups and experts were also involved in my work,’ Prosper adds. ‘I was very much collaborating with the Inorganic Material Science (IMES) group for the thin film growth using the COMAT system.’

The COMAT system is a modern multi-cluster vacuum system architecture with multiple deposition and analysis chambers for in-situ synthesis and surface characterization of thin film samples. For the low-temperature Scanning Tunnelling Microscopy (STM) measurements, Prosper collaborated with the Physics of Interfaces and Nanomaterials (PIN) Group. ‘My project also involved working in the cleanroom using photolithography and electron beam lithography techniques, for the fabrication of the Josephson Junction devices,’ he says.

Prosper: ‘I was happy to work in a well-oiled cleanroom laboratory in which the equipment user time is carefully planned well in advance, and expert technicians are always willing to help. Communication is very important to avoid delays. By collaborating with skilled people, I learned the details and tricks of research.’

In his PhD program Prosper worked from preparation and characterization towards fabrication and performing quantum transport measurements of topological insulator thin films. 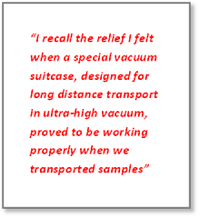 ‘A lot of steps were involved which had to be carefully taken, before obtaining the final results,’ he says. ‘I recall the relief I felt when a special vacuum suitcase, designed for long distance transport in ultra-high vacuum, proved to be working properly when we transported samples.’

With a careful procedure of handling this vacuum suitcase Prosper was able to load his samples in Twente and transport them to the University of Amsterdam Group led by Professor Mark Golden.

Prosper: ‘The Angle Resolved Photoemission (ARPES) experiments in Amsterdam were crucial to finally prove that we had high quality thin films with topological surface states, without a contribution from the bulk bands at the Fermi energy. I appreciated this collaboration. The spirit of scientific research matched our method of working at Mesa+.’