The main focus of this thesis was on developing next generation solid lubricants, for high temperature forming of steel. These lubricants are based on ceramic nanoparticles which are resistant to temperature and oxidation.

The roles of the lubricant are: to decrease the necessary forces to form the metal pieces; to protect the metal surface; and/or to participate in releasing the piece from the mould.

Most lubricants now are aqueous suspensions of graphite, molybdenum disulfide or polytetrafluoroethylene (Teflon). In searching for alternatives Henkel acted as an industrial partner.

‘I was extremely lucky because the company was involved in an intense manner, in the whole of the PhD process,’ Pablo says. ‘Alternatives stemming from our research, were tested in a mirror project, almost real-time, using the actual machinery presently available at Henkel AG. In this way we instantly knew if novel lubricants were performing well under factory conditions. Deciding so was well-chosen: in this way apparently “slow” scientific research led to practical results, already during the PhD process itself.’ 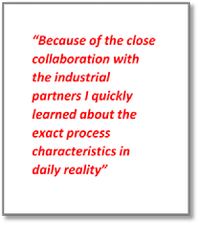 In his search for advanced solid lubricants Pablo Gonzalez was inspired by the greatest competitor lubricant nowadays available: graphite.

‘Especially the extremely soft quality we were looking to mimic,’ Pablo says. ‘Lubricants should absorb part of the forces, transforming them into a physical deformation or chemical change. Here, soft ceramic materials should resist high temperatures (up to 1200 °C) and extremely corrosive, oxidative and chemically harsh conditions. An alternative for graphite is searched for, because of the appearance of pitting corrosion on steel surfaces and, more in general, dusty working environments.’

Inorganic layered materials can be chemically modified to increase the softness needed. They are abundantly present on Earth and have a large variety of compositions. For instance clays used in pottery are well-known for their high plasticity. In this project layered double hydroxides and layered titanates were studied, as layered hosts, and large amine molecules and amino acids, as organic modifiers, in order to synthesize soft particulate nanocomposites. 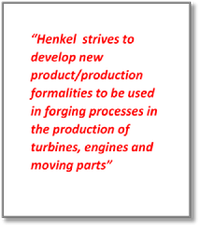 Also soft low-temperature melting metals like bismuth were examined, because of its abundance and low toxicity. A range of bismuth metal and bismuth salts was used in friction studies at different elevated temperatures.

Pablo: ‘As a member of the Inorganic Materials Science Group (IMS), I collaborated on these experiments with the Surface Technology and Tribology (STT) Group, here at Twente University. The synthesized nanoparticles were tested mechanically, on friction characterization. Getting in touch with mechanical engineers led to a collaboration project measuring the chemical properties of novel skin substitutes for friction applications.’

Pablo: ‘My promoter, Professor André ten Elshof, always encouraged me to come up with bold ideas, and explore them. Because of the close collaboration with the industrial partners I quickly learned about the exact process characteristics in daily reality, leading to a fruitful iteration process. This combination led to publications, for example in the Journal of ACS Applied Materials and Interfaces, as well as to applicable materials. Henkel strives to develop new product/production formalities to be used in forging processes in the production of turbines, engines and moving parts. Advanced ceramic nanoparticles have proven to be useful for high temperature applications in lubrication, and can be used to extend the range of applications of ceramics in general.’ 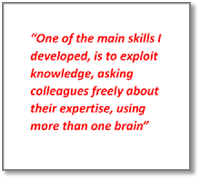 Pablo learned to appreciate the availability and accessibility of his Mesa+ colleagues greatly. ‘One of the main skills I developed, is to exploit knowledge, asking colleagues freely about their expertise, using more than one brain,’ Pablo says. ‘I suppose at Mesa+ lots can still be gained by starting a central database and support group, to share facilities and research expertise amongst researchers. I insisted within our Group to construct a facilities and equipment listing. In my own research I encountered this need as well. For a special kind of experiment, only after a long search I found the equipment to be available at the ITC faculty, here at the University of Twente.’