In this thesis the design and development of an OCT (optical coherence tomography) chip was studied. The chip is intended to finally be used as a hand-held OCT probe for skin applications.

‘We were able to shrink down the OCT chip-size to a new level, not seen before: in the hundreds of micrometer range,’ says Lantian Chang. ‘That includes the chip-sample coupling element! This is only possible because of our common-path design: using the end facet of the waveguides as a reference plane. The chip-sample coupling is accomplished by a novel on-chip micrometer size ball lens.’

By doing so no space-consuming and dispersive on-chip reference arm is needed, and no external optical elements are needed for chip-sample coupling. ‘This way we could really reduce the size and complexity of the system,’ Lantian says.

He is optimistic about the application potential of the OCT-chip in the near future. ‘The micro-ball lens directly fabricated onto the chip in combination with the common-path configuration, brings this technology close to market, I believe,’ says Lantian. ‘In the project we collaborated with chip-development experts from Lionix BV. The concept and the components are based on current mass-production techniques.’

The performance of the chip was demonstrated with a swept-source OCT configuration. The signal-to-noise ratio was acceptable as compared to other fiber based systems, and ghost images could be largely suppressed by using de-convolution algorithms. 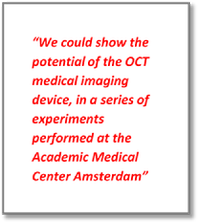 ‘We could further show the potential of the OCT medical imaging device, in a series of experiments performed at the Academic Medical Center Amsterdam,’ Lantian says. ‘Here we could use real-skin samples, showing µm-resolution in the top 2-3 mm layer. This convincingly affirmed our lab experiments.’

Lantian strongly believes the unconventional micro-ball lens design is workable in a broader range of applications, beyond medical imaging. ‘This broader scope was intended right from the start of the project,’ he says. ‘In our first publication, in Optical Express, the importance of this approach was recognized for the first time.’ 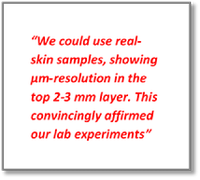 In this PhD project the expertise contribution of several companies was of vital importance, Lantian finds important to share. ‘My supervisor and our technicians were always open to new ideas,’ he says. ‘The technicians for example are experts on judging the feasibility of my approach and strategy in an early stage already, as they know their equipment and the way nature will – or will not – react.’ 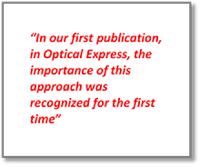 Already in his master’s work Lantian found that a free, out of the box, attitude is appreciated greatly at Mesa+. ‘Furthermore, I enjoyed attending international conferences as well as the Mesa+ meetings,’ he says. ‘Here one can get inspired by the projects of others, sometimes on quite different subjects. Though not intended beforehand, it frequently happened that new fruitful ideas arose out of these events.’

As a member of the Nanobiophysics Group, Lantian will make a change, to start working as a post-doc at the Medical Cell Biophysics Group. ‘The research topic will be a quite different one,’ Lantian says. ‘I want to learn more about using specialized equipment such as SEM-imaging, Focused Ion Beam and Raman Spectroscopy.’ 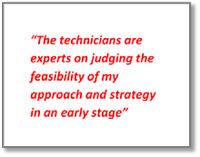 Lantian continues: ‘Apart from further improving such characterization techniques, also in this job I will be challenged to modify devices and integrate components in novel ways. The engineering part of the job very much appeals to me on a personal level, as I like to make new designs work really well. Therefore, in the long run, I guess, my future job will be in industry.’