In this thesis the functionalization of scanning probes for sensing, actuation and deposition was investigated. Regarding actuation, the integration of an electrostatic microactuator into an AFM (Atomic Force Microscopy) probe was investigated, to obtain a mechanically active probe.

One of the motivations was to work towards video-rate AFM, which can be of importance for studying biomolecular and catalytic processes. This requires sharp and durable tips. ‘One of the limiting factors is the bulk piezo, because hysteresis and creep come into play,’ says Joël Geerlings. ‘By using integrated capacitive microelectromechanical systems, higher scan rates can be expected.’

Apart from scientific publications and conferences, the work of
Joël Geerlings led to media attention and to popular scientific publications. This was on the aspect of electrochemical sensing and liquid deposition via AFM. For the electrochemical experiments nanofountain pen probes were filled with mercury. Regarding deposition, nanofountain pen probes were filled with aqueous solutions, and both direct-contact and contactless “writing” techniques were surveyed. 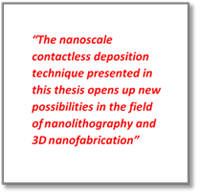 To make the actuator integration more straightforward, a silicon-on-insulator (SOI) compatible process, for the fabrication of in-plane tips (directed in the plane of the fabrication wafer), was developed and tested. With this process, sharp silicon nitride tips could be batch fabricated on monocrystalline silicon cantilevers. The best measured tip radius was 8 nm. Further: the in-plane aspect of the fabrication allows for arbitrarily shaped cantilevers.

Essential for the project has been the collaboration with SmartTip BV. Dr. Edin Sarajlic developed new nanofountain pen probes which were used extensively in the project.

Electrochemical sensing functionality in AFM was obtained by filling a nanofountain pen probe with mercury, resulting in an in-situ renewable mercury microelectrode. Both dropping mercury electrode and hanging mercury droplet configurations were obtained by the control of the pressure on the mercury.

‘Initial ideas here stemmed from dr. Peter Schön, assistant professor at the Materials Science & Technology of Polymers group,’ Joël Geerlings says. ‘The collaboration we had on the sensing work led to a patent and a publication in Analytical Chemistry. Also considerable media attention resulted from this joint effort.’

A significant increase in droplet deposition speed was obtained by writing lines, which subsequently broke up into droplets. By using electrohydrodynamic deposition, scaled down to micrometer sized gaps, contactless deposition of solids dissolved in liquid was achieved. This technique allows for the deposition of polar liquids on non-wetting surfaces. Patterns such as the MESA+ logo were written, having a length of 34 µm and spots as small as 50 nm could be obtained. 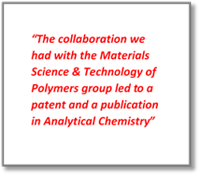 ‘The nanoscale contactless deposition technique presented in this thesis opens up new possibilities in the field of nanolithography and 3D nanofabrication,’ says Joël Geerlings. ‘The added functionality to AFM probes demonstrates the wide range of possibilities available, making AFM truly an essential enabling tool for nanotechnology. For example novel fabrication of scaffolds for the growth of biological cells and printing electronic circuits, are under consideration.’

Joël’s work led to several other publications. A Journal of Micromechanics and Microengineering (JMM) paper was on the in-plane probes. A paper in Applied Physics Letters (APL) was published on contactless deposition.

‘These were memorable milestones in the project,’ he says. ‘Also speaking at the MEMS conference in San Francisco, with an audience of about 700 scientists, was a wonderful experience. Another exciting moment I recall, was the first time we deposited droplets of which we could clearly prove that this process was contactless.’ 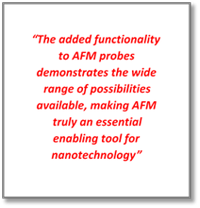 As a PhD Joël faced various challenges while performing experiments. Especially in nanofluidics the parameter windows are narrowly defined, he mentions. ‘Skilled technicians and colleagues helped me out a lot, which added to my skills.’

After the Defense Joël will be working as a post-doc at the VU in Amsterdam on experiments involving microfluidics and electric measurements. ‘During this period of time I am free to explore if I prefer to stay in academics or rather would like to work in industry. Performing application oriented research at a spin-off company certainly is appealing to me.’