The core of Femi’s research was to determine experimentally and theoretically the distribution of the energy density inside a disordered medium, when incident light is optimized using wavefront shaping. Wavefront shaping - invented earlier at COPS - can focus light through disordered medium. Femi’s thesis contributed significantly to understanding how light propagates inside these disordered materials, which are opaque.

‘The optical energy density was probed using fluorescent nanoparticles distributed inside the samples,’ he says. ‘For the first time ever, I discovered that the total stored energy is enhanced using wavefront shaping. This is in agreement with theoretical predictions and numerical simulations, all carried out in this thesis.’

‘The ordered systems I studied were photonic crystals,’ Femi says. ‘However: photonic crystals also have inevitable fabrication-induced imperfections. We asked whether it is possible to deduce the form of the wave propagation inside photonic crystals by measuring the reflected intensity. We modelled the total field exiting the crystals, as a coherent superposition of Bloch waves and spherical waves and the model is well validated by the experiment.’ 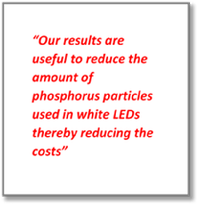 The diverse studies carried out in this thesis are all for the purpose of ‘stirring’ light to control light absorption in complex nanophotonic devices. Absorption is intrinsic in optical materials and is usually considered as a nuisance. Light absorption is however useful in devices such as solar cells, white LEDs, and random lasers.

The idea behind the multi-university FOM project called ‘stirring of light!’, which Femi’s research is part of, is to use optical wavefront shaping and nanostructures (such as a photonic crystals) to enhance photon absorption, for conversion to electrical signals and white light generation. 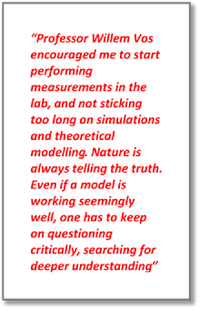 Though primarily fundamental in nature, Femi stresses his work contributes to gain better understanding of photonic phenomena that are promising for future applications by ‘stirring’ light.

‘For instance shaping the incoming wavefronts of real solar cells, might increase the intensity transmitted through the scattering layer on the solar cell and thus increase its photocurrent yield,’ he says. ‘Though several challenges remain, optimized phase masks, deposited as a front layer on the solar cell, seem feasible in future. I believe, different phase masks can be fabricated for different wavelengths of interest in the spectrum. A broadband enhancement of photocurrent is possible this way.’

Femi also found reasonable grounds to control the colour of white LEDs. By optimizing the pump blue, using wavefront shaping, the blue part of the white LED can be controlled. ‘Our results are useful to reduce the amount of phosphorus particles used in white LEDs and thereby reducing the costs.’ he explains.

His work on wavefront shaping in opaque media, led to publications in leading journals. More articles – on both opaque and photonic crystals - are currently in preparation.

‘I have developed as an independent scientist.’ he says. ‘During my PhD, I enjoyed the luxury of working with three eminent scientists: Willem Vos, Allard Mosk, and Ad Lagendijk from which I have learned a lot. I’ve acquired several experimental skills such as setting up optical experiments, controlling devices, automating measurements in LabView, and analysing vast amounts of data.’

Femi also learned to understand experimental results by developing simple analytical models. ‘I owe a great deal to the research philosophy of my advisor, Professor Willem Vos. He encouraged me to start first with performing measurements in the lab, and not sticking too long on simulations and theoretical modelling work. Nature is always telling the truth. Even if a model is working seemingly well, one has to keep on questioning critically, searching for deeper understanding. Also I enjoyed the seminars and meetings with other MESA+ Groups within the Applied Nanophotonics cluster.’ 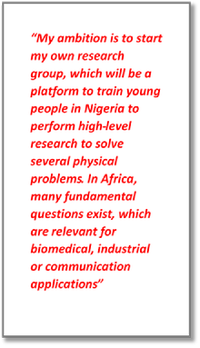 The half year coming up, Femi will be working as a post-doc at his current group COPS.

‘In the more longer term future, I would like to return to my home country of Nigeria,’ he tells. ‘My ambition is to start my own research group, which will be a platform to train young people in Nigeria to perform high-level research to solve several physical problems. In Nigeria (and Africa at large), there are many fundamental questions that need to be answered in different fields, which are very relevant for biomedical, industrial or communication applications.’