In this thesis interfaces are studied that play an important role in charge transfer and charge/spin transport along and across thin layers.

‘Quantum mechanical understanding of these processes is guiding device performance,’ Diana Otálvaro says. ‘Spin/valve architectures using organic materials are strong future candidates to be implemented in hard disks one day.’ Lower operating voltages are feasible for organic molecule structures which are, above that, relatively cheap to produce.

‘Performing simulation experiments and theory building, were at the heart of my research,’ Diana shares. ‘Finding an elegant explanation of the underlying physics in spin transport, was one of the key moments in my PhD project which led to a publication in Physical Review Letters B. The model sheds light on how spin is transported in popular interfaces and the parameters that matter here.’

The interface processes, surface phenomena, magnetization (in particular magneto-resistance) & electronics (in particular current polarization) which are relevant in her research, Diana came up with a new terminology, calling it: spinterface. Diana: ‘I am sure my findings are relevant for other systems as well. Although some limitations still exist, the work is of a pretty general nature.’ 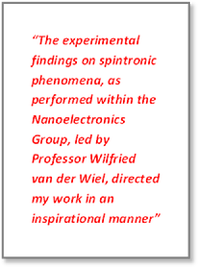 During her PhD Diana Otálvaro worked as a member of the Computational Materials Science Group, led by Professor Paul Kelly.

‘We are the only computational (materials science) Group within Mesa+,’ she says. ‘The experimental findings on spintronic phenomena, as performed within the Nanoelectronics Group, led by Professor Wilfried van der Wiel, directed my work in an inspirational manner. Although no major collaborations with other Mesa+ groups took place, I enjoyed the interest shown in my work by other colleagues, for example during the Mesa+ Days. Within Mesa+ a strong vision on research is present, and the experimental facilities available are amazing.’ 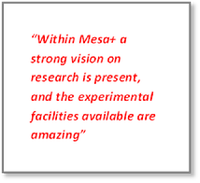 Main chapters of her work include interface dipole layers resulting from self-assembled molecular monolayers, absorbed on gold and silver surfaces. Charge displacements modify the interface dipole layers here, which is observable by a change in the work function. Further, spin-polarized transport through organic spin valves using bilayers of C70 molecules sandwiched between two ferromagnetic Fe electrodes were studied. This was extended by including bilayers and trilayers of C60 and C70 molecules.

‘In the last chapter we studied Co|Al2O3|Co spin valves,’ Diana says. ‘These are popular tunnel barriers in scientific experiments and in strategic company’s research. During the PhD project I learnt to be flexible all the time while performing research. While searching for answers in a specific direction, the awareness grows that more aspects are involved to come to a more complex overview, further completing the scope of the research field. New details come to light, making computational research and modeling a complex process, going back and forth continuously.’

Living in Stuttgart now, Diana prefers a future job in industry: ‘I now prefer to go and work in a more varied setting, working as a team member on parallel subjects. My simulation and computational skills can prove a good expertise in all kinds of work fields, I am sure of.’