In this thesis the formation of TiO2 thin films is the starting point of evaluating various reactor configurations. Damon Rafieian used DC magnetron reactive sputtering and he characterized the dynamics of the process, the crystal structures and carrier mobility, using various nanolab equipment.

‘The optimized thin films were incorporated in a microreactor,’ he says. ‘The photocatalytic performance was measured. Because no added chemicals are needed, solar-active photocatalytic devices on water purification and other applications are close to commercialization, I believe.’

Damon’s project was part of NanoNextNL program theme in which many companies participated. ‘Within Mesa+, using the widely available equipment facilities, practical dreams and ideas come true,’ he says. ‘Because of the expertise and experience of the members within the NanoNextNL team, good scientific lab results and commercial success milestones were obtained.’ 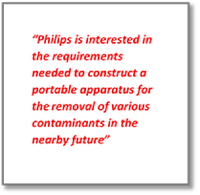 2 thin films was taken to a new level in this thesis work. For example patterned TiO2 thin films were fabricated, and an Atomic Force Microscopy (AFM) was employed to measure in-situ force interaction between the AFM tip and TiO2 deposited on different substrates.

Damon Rafieian also fabricated and modeled an immobilized porous TiO2 thin film based photocatalytic microreactor. Furthermore he described the fabrication and catalytic performance of an alumina hollow fiber microreactor, impregnated with carbon nanofibers as catalyst support for hydrogenation of nitrites.

‘Photocatalytic devices were proven to be a viable option for removing a broad range of pharmaceutical contaminants ,’ Damon says. ‘For instance cortisone acetate could be eliminated with 90% efficiency within only twenty seconds. Philips and Vitens showed great interest in this facts, even resulting in a patent by Philips regarding the removal of nitrates from water. The company especially is interested in the requirements needed to construct a portable apparatus for the removal of various contaminants in the nearby future.’ 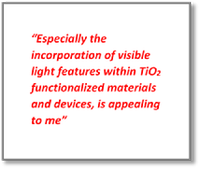 Although the devices and components used here are close to commercialization, as Damon is convinced of, he also has a realistic view on this developments.

‘There are some obstacles to be overcome in the near future,’ he says. ‘Now only 5% of solar energy is effectively being used. This yield has to be further improved, in which the contribution of the visible light frequencies has a great potential, in my view. The microreactors – what platforms for these reactions are the best? – can be optimized considerably as well.’

After his Defence Damon strives to go and work within industry, preferably on this type of photocatalytic research.

Damon: ‘I guess companies such as Philips and Vitens might be interested in my expertise. Especially the incorporation of visible light features within TiO2 functionalized materials and devices, is appealing to me. The interdisciplinary focus of this research field I really like, as electronics, materials engineering, chemistry and nanotechnology all are involved. After building up my research skills and experience further, perhaps, one day, I might return to academics again.’