In this thesis, two different setups are proposed to study sperm cells individually. The first setup is designed to entrap a sperm cell on a fixed position, allowing analysis of a single cell over time.

The second setup consists of a single channel in which sperm cells are flown through a pair of microelectrodes. ‘This second system is very interesting for applications in livestock industry,’ says Bjorn de Wagenaar. Here, removal of abnormal sperm cells from semen could improve semen quality. ‘By doing so, bad sperm cells can be taken out, improving the overall quality, without having to throw away the examined batch altogether.’

Combining microfluidic lab-on-a-chip technology with electrodes to electrically analyse each passing sperm cell, is quite unique. ‘This research was very application driven. Active collaboration took place with Topics Norsvin, a swine genetics company from the Netherlands.’

The presence of morphological sperm anomalies was successfully identified, and furthermore a label-free sorting system was developed using dielectrophoresis. ‘These are innovative steps, making animal genetic companies more interested in microfluidic technology,’ Bjorn de Wagenaar says. ‘It is expected that in the near future, collaborations for applications in assisted reproduction technologies will start, inspired by these results.’

Also the entrapment setup has its relevance, both in reproduction technologies for animals as in future human fertility treatments. The ability to study sperm cells in a non-destructive way has potential for improving sperm selection.

Here, the setup consists of a microfluidic chip, consisting of two main channels that are interconnected by tiny side channels. Upon a pressure difference in between these main channels, the sperm cells are trapped, because their head is too large to fit through. Now, several sperm characteristics can be studied on the single cell level using fluorescent staining, including the integrity of the plasma and acrosomal membranes. 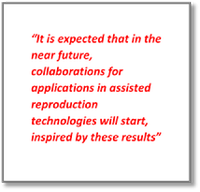 This system was also used to electrically study the swimming behaviour of single sperm cells when increasing the fluid temperature to 38 °C. Integrated microelectrodes were used to record changes in the measured impedance over time, and when a motile sperm cell was present in between two electrodes, these changes provided information upon the sperm motility.

‘The effects of a chemical stimulus, in this case caffeine, could also be studied,’ Bjorn says. ‘The motility, swimming behaviour, was clearly affected on the single cell level. The characterizing method, using electrodes, was verified in a scientifically elegant way, indicating to be a good alternative for prevailing optical detection systems.

Bjorn started his project by getting to learn the microfabrication techniques involved. ‘Following courses and starting to learn cleanroom techniques was a special experience,’ he says. ‘Building a complete chip is real craft in itself. After some eight months I was able to perform my first experiments.’ 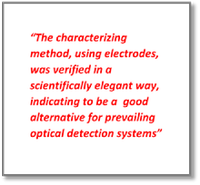 His skills as a researcher developed, as did his view on scientific research. ‘During my first years, I learned to convert my ideas into interesting experiments,’ Bjorn says. ‘In the last years of my project, I changed my point of view and performed those experiments to provide the right contents, to answer the main research questions. In some way, the chronology of my research strategies reversed.’

Bjorn added confirmation of him being an engineer in the first place: ‘Successful experiments and inspiring meetings with the companies involved, gave me positive energy and added to my motivation. After the Defence I started to work at a spin-off company in Leiden, building novel platforms for biological research. Chip design, fabrication engineering expertise and handling biological samples all come into play here. A good match between my expertise and interests is realized in this job, so I am very lucky to go and work there.’