In this thesis enhanced oil recovery (EOR) is studied. Bijoyendra Bera focused on a main step in this process, namely wettability alteration. In such a process, an oil-wet reservoir-rock is turned into a waterwet surface, which is then able to release oil droplets, in order to ensure incremental oil-output.

‘First, we investigated the competitive wetting of aqueous salt solutions and oil on mineral surfaces,’ says Bijoy Bera. ‘We strived upon three lines of research to converge: practical inspired questioning and expertise knowledge from the oil industry; theoretical modelling of the processes involved; and experimentally finding evidence for hypotheses present at various levels.’

For example the effects of surface-active fatty acid, in ambient oil on aqueous drops wetting mica and silica, were studied. Here a spontaneous increase in contact angle (autophobing) was observed in the presence of divalent cations in the aqueous phase, at a high pH. ‘Thus we demonstrate wettability alterations in relevant systems, driven by ionic species and surfactants,’ Bijoy says. ‘We were able to theoretically model the underlying physics of such phenomena.’ 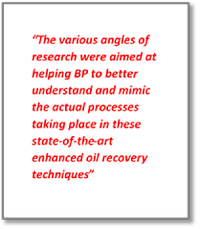 In explaining the relevance of his research, Bijoy Bera points at the importance to enhance the recovery processes of oil resources with novel, sustainable and environment-friendly techniques, various stakeholders are in pursuit of.

‘We collaborated with British Petroleum in London, and Universities of Göttingen (Max Planck Institute) and Copenhagen,’ he says. ‘PhD’s, post-docs and project investigators were all involved. The Physics of Complex Fluids was one of the investigators on this project, and was led by Professor Frieder Mugele. Every six months we organized progress meetings. The various angles of research were aimed at helping BP to better understand and mimic the actual processes taking place in these state-of-the-art enhanced oil recovery techniques.’

Since the temperatures and pressures in the oil reservoir cannot be changed, salt water injection might be of help. ‘Inside the rocks it is hard to control these parameters exactly,’ Bijoy says. ‘Salt injections one can control exactly. However, theoretical evidence of the actual processes taking place is hard to find. On the other hand, experimental evidence and working/process knowledge, is at hand in a fuzzy way. By combining physical and chemical modelling techniques based on solid experimental evidence, we designed new mathematical models gaining some important insights of practical relevance.’

Combining physics and chemistry was a challenge for Bijoy whereat he was inspired and helped by his professor and colleagues.

‘I certainly did enter new areas of knowledge and research,’ he says. ‘In the end, the exact discipline is not of prime importance. The challenge is to bring together different ideas, working on them with colleagues. All publications were joint efforts, as was the prime publication in Nature Scientific Report.’

Bijoy also collaborated with Mesa+ Groups, using: cleanroom equipment from the Nanolab; required instrumentation from the adjacent member groups of the institute. ‘Without the equipment available at Mesa+, this research would have been totally infeasible.’ 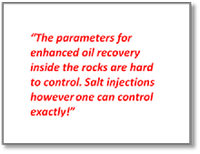 After his Defence Bijoy will be working as a post-doc at the Soft Matter Group at the University of Amsterdam.

Bijoy: ‘After that I would prefer to continue and work in academics, though I am aware research funding and subsidiary prospects are hard to get at present times. However, working for industry also is appealing to me, when lab work and gaining extra theoretical insights in processes and phenomena are involved.

‘Further, I thoroughly enjoyed my education activities in teaching Dynamics to bachelor students for several years. I did push myself in learning the Dutch language from scratch in these four years of time. Pursuing a teaching appointment in a University or Graduate School may be slightly unusual, it would nevertheless be a fantastic future opportunity for me.’