In this thesis project supramolecular assemblies were studied that can be used to visualize biological recognition events. However, there is a second line of research, Bettina Schmidt adds. ‘While some dyes assemble into fluorescent objects, some can generate singlet oxygen as well. This interesting property allows the use as a diagnostic and therapeutic tool.’

As a first system, glycoconjugated porphyrins had been synthesized. ‘Here the size of the π-conjugated system is important,’ says Bettina. ‘A stable triplet state is needed in order to successfully generate singlet oxygen. This is triggered by shining light on the supramolecules, to bring them in an excited state.’

The second system consisted of thiophthalonitriles whose assemblies showed excellent fluorescent properties. ‘Aggregation-induced emission is the exception rather than the rule. And that was shown here!’ Bettina explains. ‘Therefore these fundamental findings were welcomed, both in scientific publications and in the context of possible future use in biomedical applications. The important advantage is that the fluorescent behaviour was expressed better in watery environments than in organic ones.’ 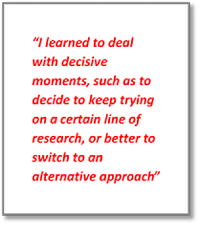 The research Bettina Schmidt performed was of a fundamental nature. ‘This research is important and might one day be helpful in medical practice,’ she says.

‘Two special moments I clearly recall. Using nuclear magnetic resonance and mass spectrometry, it was thrilling to see the complex molecules we synthesized, had actually formed. Also observing the excellent fluorescent properties, under the microscope, was very rewarding.’

A former post-doc in the Molecular NanoFabrication (MnF) Group first observed the specific fluorescent phenomenon Bettina was able to characterize later. ‘I am glad this work could be taken further. In collaboration with the University of Münster - where the post-doc was working then - we obtained interesting results. They had excellent expertise, and experimental equipment, which were important for us.’ 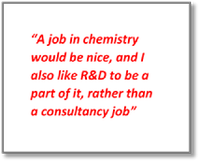 Her time working as a PhD-student in the MnF Group, supervised by Professor Pascal Jonkheijm, served as educational and formative years for her, Bettina shares.

‘The meetings with Pascal were always inspiring. I learned to deal with decisive moments, such as to decide to keep trying on a certain line of research, or better to switch to an alternative approach. After the first year for example - less successfully synthesizing on one molecule - we decided to switch to another one, starting the whole process all over again. This proved to be a good choice eventually, in which we reached some nice results.’ 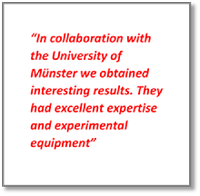 As a master in chemistry, Bettina learned about biological and medical aspects. ‘Now I know a lot more about cells and the functioning of organisms,’ she says. ‘Furthermore, several of my research fellows at the MnF Group are involved greatly in the physics part of supramolecular processes. This appeals to me as well, as I attended some very interesting Mesa+ colloquia from them on these topics.’

In her future job, Bettina prefers to go and work in industry as she longs to see the impact of her work in a more direct manner.

‘In academics the results are hidden in the future,’ she says. ‘A job in chemistry would be nice, and I also like R&D to be a part of it, rather than a consultancy job.’