In this thesis a novel carbon material was developed for emulsified droplets separation from oily wastewaters, such as produced water resulting from oil extraction. An activated carbon nanofiber nonwoven (ACNFN) material is fabricated using the electrospinning method, followed by subsequent thermal steps.

‘The material is a form of activated carbon, fabricated from a polymeric solution,’ Basma Waisi explains. ‘This new concept functions well on a small scale.’

According to the batch dynamic adsorption test, ACNFNs show the ability to outperform commercial granular activated carbons (GACs). Contributing to the highly positive results of ACNFNs are: its high accessible surface area, its high porosity, and its hydrophobicity characteristics.

The results show that the oil droplets are removed by size exclusion and adsorption mechanisms, without an obvious increase in pressure drop over the system. Furthermore, the regenerability of ACNFN for oil adsorption was studied by washing the saturated ACNFN sheets with an organic solvent. The results show no significant change in the oil adsorption characteristics for three adsorption/cleaning cycles. 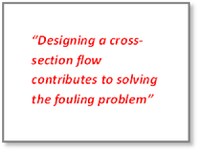 Before testing the successful novel approach on a larger scale, first extra knowledge has to be generated as to the removal potential to other chemicals and contaminations, for example by adding more functional groups. This step will be taken up by the team of students led by University of Connecticut Professor Jeffrey McCutcheon (Department of Chemical and Biomolecular Engineering) and Professor Tim Vadas (Department of Civil and Environmental Engineering). 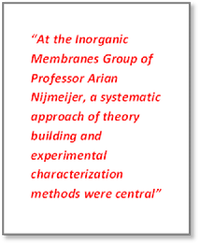 ‘In this project I was fortunate to have worked for three different groups, learning different skills and getting to know new disciplines,’ Basma says. ‘At Twente University I first worked with Professor Suzanne Hulscher, from the Water Engineering & Management Group. After that I spent two years in Connecticut where I felt very free performing research, leading to very positive results. At the Inorganic Membranes Group of Professor Arian Nijmeijer, a systematic approach of theory building and experimental characterization methods were central.’

As adding to her skills in this PhD project, Basma mentions her improved scientific language, writing and presentation skills. After her Defense she will be a lecturer at Baghdad University, as an assistant professor on Chemical Engineering, specialized in water treatment. 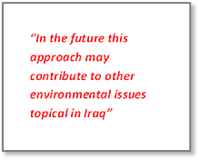 ‘In this PhD I studied produced water streams stemming from five of the largest oilfields in the south of Iraq,’ she says. ‘I characterized the oil production profiles of these oilfields. This type of wastewater is heavily contaminated with different types of pollutants such as oil, suspended solids, heavy metals, and salts. In the future this approach may contribute to other environmental issues topical in Iraq as well, such as challenging pollution issues from dye industries.’