The main focus of this thesis research was to explore mass-transport processes. This was done for redox-active analytes in concentrated supporting electrolytes, when driven by external pressure through nanofluidic channels with embedded electrodes.

‘The principal devices in the experiments were so-called nanogap electrodes,’ Jin Cui says. ‘These consist of two electrodes located in the floor and roof of a nanochannel.’

Electrochemical reactions taking place at the electrodes, can profoundly disturb the concentration distribution of analytes along the axial direction of the nanochannel in several manners. The large surface-to-volume ratio that exists in these nanofluidic devices means that any interactions between analyte molecules and surfaces, manifest themselves more strongly than in conventional systems.

In the first chapters (1-3) it is investigated how transient concentration disturbances can be created. Pressure driven convective flows can transport the so-caused concentration profiles downstream.

Interactions with the channel wall cause different species to become separated. ‘This resulted in a new form of electrochemical chromatography,’ Jin Cui enthusiastically shares. ‘We were able to optimize this principle by varying the geometry of the channel and controlling the potential of the channel walls, by adding gate electrodes spanning the entire length of the channel.’

Chapter four resulted in describing an unforeseen consequence of introducing multiple nanogap transducers and/or gate electrodes. It was shown this can lead to significant coupling between different regions of the system (and thus to apparent non-local coupling between the electrodes).

‘It took a long time to understand these new effects, occurring at a channel height of 100 nm,’ Jin says. ‘We have now partly described the main phenomena. The research will continue on this interesting scientific subject within our Nanoionics Group, led by Professor Serge Lemay.’ 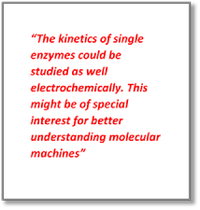 Also taken on in further research, will be the various potential applications of the electrochemical reactions taking place within the channels. Jin is happy the expert staff of the Group kindly helped him, learning the different ‘ingredients’ needed to fabricate the devices, and to have these special functionalities built in. He also collaborated with experts from the University of Columbia (USA) and the company PacBio, developing novel technologies in sequencing. Described is, for example, the detection of single conducting polymer molecules between two closely spaced electrodes. 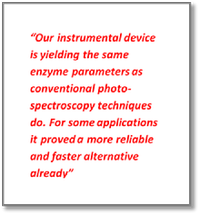 ‘The principles taking place might also be of great interest in detecting short DNA oligomers,’ Jin says. ‘The kinetics of single enzymes could be studied as well electrochemically. This might be of special interest for better understanding molecular machines. Our instrumental device is yielding the same enzyme parameters as conventional photo-spectroscopy techniques do. For some applications it proved a more reliable and faster alternative already.’

After his bachelor in chemistry, Jin started to gain interest in materials science and nanotechnology while studying as a master student at the University of Twente. 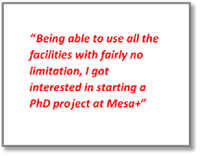 ‘Being able to use all the facilities with fairly no limitation, I got interested in starting a PhD project at Mesa+,’ he says. ‘I now love to study physics; especially statistical and biophysics I find fascinating and extremely interesting. I prefer a career in academics. I now know better where the “blanks” and main scientific questions are still left open. If give the chance, I would love to continue working on these first. I also have great interests in biophysics. Someday, I would like to work in that area.’