In this thesis artificial photosynthesis is highlighted, as it is perceived attractive to directly convert solar energy into fuels. The development of efficient photo-catalysts however is critical here.

‘Many steps are involved in these complex processes, occurring at different time scales,’ Qing Pan says. ‘But they all start with light absorption, followed by ultrafast electron and energy transfer. I studied these early steps which are of decisive importance: the early phases determine and influence the processes occurring at later time scales.’

Qing focused on Ruthenium-based hydrogen generating photocatalysts. He studied more than fourteen of them, and their related complexes. He used various spectroscopic techniques to study the photodynamics at early time scales: i.e. between 10-15 – 10-6 seconds.

‘From a systematic understanding of these fundamental processes, new design strategies for developing better photo-catalysts can be obtained,’ Qing shares. ‘I showed an example of this for a special type of photocatalysts. But the research method can be extended to other related areas, for example to develop novel solid-state semiconductors or molecular/semiconducting hybrid systems. So, my PhD may serve as a starting platform for the design and optimization of more complex systems.’

Especially using the transient absorption setup in his PhD project, Qing values as decisive. Ultra-short laser pulses were generated, allowing him to explore fundamental photodynamics with about 100 femtoseconds time resolution.

‘The great extra value is combining the various spectroscopic techniques,’ he says. ‘Together with time-resolved photoluminescence and X-ray absorption, the excited states can be thoroughly studied. This work resulted in a far better understanding in order to address why some molecules are more active than others. From this knowledge I designed a compound which I hope will outperform the other photocatalysts.’

In the MESA+ BioNano lab, Qing was the first user of the streak camera setup. ‘This setup is capable to detect picosecond ultrafast photoluminescence decays,’ he says. I designed and built the optical pathways in front of the camera in order to extensively use this equipment. This was done in close collaboration with technicians from Hamamatsu, a famous streak camera manufacturer. Also I guided a master student in his work to use this setup. I hope more people within MESA+ can use this setup for their research.’

In his PhD-work Qing also collaborated with the MESA+ Photocatalytic Synthesis (PCS) Group, led by Professor Guido Mul, using specific expertise on catalysts and catalytic processes. In the MESA+ annual symposium in 2014, Qing was one of three poster prize winners. 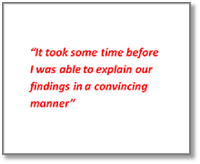 The acceptance of his fourth article, published in Chemical Communications, was one of the breakthroughs during his PhD project. ‘Our ideas were different from the widely accepted opinions in this community,’ Qing says. ‘Especially our conclusion on utilizing peripheral ligands as a temporal storage reservoir for the first photo-excited electron, were distinct. It took some time before I was able to explain our findings in a convincing manner. I’m very glad Chemical Communications accepted my paper. From this I learned a lot. The next paper was accepted very quickly in ChemPhysChem, within just a month.’ 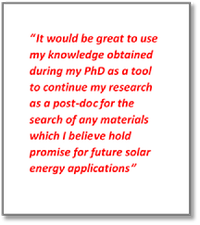 In a post-doc position Qing hopes to continue his experimental approach and broaden it towards semiconductors and hybrid systems.

Qing: ‘I wrote a proposal based on my research interest, knowledge and expectations. I am also searching for sponsors. It would be great to use my knowledge obtained during my PhD, as a tool to continue my research as a post-doc for the search of any materials which I believe hold promise for future solar energy applications. This plan is ambitious, I agree on that, but it is worth trying. At the same time I am also looking for post-doc open positions, suiting my expertise and interest, as I am very much interested in pursuing an academic career.’