In this thesis properties of a family of macrocycles – called cucurbit[n]urils (CB[n]) – are discussed, especially the 8-membered macrocycle CB[8].

For example photosensitive and cell adhesive complexes on self-assembled monolayers were built. ‘By doing so the adhesion of cells could be modulated,’ Emanuela says. ‘Ternary complexes on supported lipid bilayers, were able to trap non-adhesive cells carrying metabolically introduces guest moieties.’

Studying this special type of CB[8] molecules has a good reason, Emanuela Cavatorta explains. ‘The shape resembles a pumpkin, belonging to the botanical family of the Cucurbitacea – hence the CB[n] name – but the cucubiturils are actually more donut-shaped,’ she says.

The cavity can catch and release small molecules (ligands) to probe cells, which makes them an artificial receptor for these ligands. ‘The artificial interfaces we designed are able to mimic living cells and their interaction with their natural environment,’ Emanuela says. ‘Using dynamic and reversible interactions such as in these ternary complexes, is a clever choice. Most bonds in nature are reversible, forming and disassembling too.’

According to Emanuela her work is ‘definitely fundamental’ in nature, aimed at enlarging the experimental toolbox of studying biochemical processes in the future.

‘Designing new platforms for probing and imaging living cells are future application areas,’ she says. ‘Also shielding bodily active substances until releasing them, seems a promising goal. But before that, some underlying questions need thorough examining, in order to get insight if this kind of molecules can fulfill this role.’

Emanuela can recall as a special moment, one of the CB[8] complexes performed very well, right from the very first start.

‘The CB[8] was functioning as a very promising building block for nanoparticles,’ she says. ‘We were very positively surprised, that we could assemble particles by simply mixing the three components of our ternary complex, and the formation and disassembly of these particles were reversible! It shows that our approach is a promising one, though still delicate for in vivo applications. The proof of principle however is there.’ 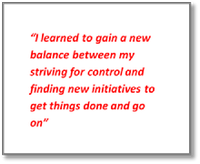 In the first year of her PhD, the project was progressing slowly, Emanuela shares. ‘It is all part of scientific research. Now I know far better how to proceed if problems or disappointments arise. I’m much more organized in a way, making my choices in the right mindset. I guess I learned to gain a new balance between my striving for control and finding new initiatives to get things done and go on.’

Emanuela worked as a member of the Molecular Nanofabrication Group, with Professor Pascal Jonkheijm and Professor Jurriaan Huskens as her promotors.

‘As a chemist, I noticed the work was drifting towards biology more and more,’ she shares. ‘This is a fascinating and complex world, far more unpredictable than any organic synthetic structure. The help from many of my colleagues was essential for me to find my way through.’

In surface preparation and characterization, the equipment and support from colleagues, also from other groups and Cleanroom technicians, was equally important, Emanuela says. ‘I learned a great deal of skills and knowledge. I am now looking for a new challenging job. I would like to work on R&D projects leading to applicable innovations, and where I can come into contact with collaborators or customers, thereby carefully listening to their needs and expectations. ‘