This PhD thesis presents energy conversion systems, based on motion of ionic charges in micro and nano confinements. Power obtained from the motion of ionic charges in the electrical double layer - by applying an external driving force - and a novel centrifugal set-up, were eye-catching achievements. ‘We proposed a novel device and mechanism. An electrokinetic energy converter without membranes or small channels, is an important step from a technological point of view,’ Trieu Nguyen says. ‘My work covered the whole range: designing new set-ups, chip fabrication, mathematical modelling and performing experiments.’

Traditional approaches to convert movements of positive ionic charges into electricity in microchannels, encounter serious drawbacks. By utilizing different kinds of liquids, in both on-chip and off-chip platforms, and by applying different forces, Trieu already in an early phase of his PhD project, could show some serious results. 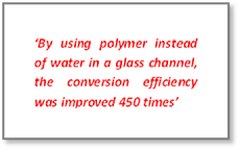 ‘By using polymer instead of water in a glass channel, the conversion efficiency was improved 450 times already,’ he says. ‘The viscosity and the forming of a depletion layer near the surface, contributed to that. The results were published in Lab-on-a-Chip Journal, and were highlighted by Harvard University.’

Proceeding from these results Trieu designed unique set-ups, based on a glass rotary atomizer. ‘The electrical current to be obtained was exceptionally high as compared to traditional approaches with a membrane or a small channel,’ Trieu says.

The two-phase centrifugal set-up showed high throughput, being able to collect ionic charges efficiently, in a totally new platform as compared to pressure driven devices. The results were once again published, this time in Physical Review Applied journal.

‘Fabricating the device was challenging, as were the experimental measurements,’ Trieu says. ‘The complex mathematical model included: size distribution of the droplets, droplet velocity and centrifugal forces applied.’

All of the variables were addressed, to understand the mechanism of converting mechanical energy into electrical energy. ‘I collaborated on this with the Physics of Fluids group,’ Trieu says. ‘Getting familiar with all aspects of scientific research was challenging and enriching, working from set-up design up to modelling and performing experiments.’

During his PhD, besides publications in high impact journals, Trieu was happy to present his work - both with posters and by oral presentations - in several world-class conferences, such as MicroTas2012; Microﬂuidic Handling Systems 2012; MicroTas2013; Flow14; and MicroTas2015. ‘In future I plan to become a research scientist as discovering new phenomena and fabricating micro and nano fluid devices, appeals to me. I am applying for post-doc positions abroad, first of all in the US, Germany and Singapore.’