In his thesis different aspects of extreme ultraviolet (EUV) optics are investigated: spectral purification of light sources, and a new class of piezoelectric based adaptive multilayer mirrors. ‘In new mirror designs we have to deal with the physical limits of materials,’ Muharrem Bayraktar explains.

In fabricating computer chips, the physical boundaries are challenged in various ways. Using extreme ultraviolet wavelengths and multilayered mirrors, resolutions down to several nanometers can be achieved.

In the first part of his PhD-project, Muharrem Bayraktar investigated new ways to enhance the spectral quality of EUV light sources, using diffractive Fresnel zone plates, patterned in the surface of a curved mirror.

‘We showed that unwanted, reflected light can be suppressed up to 10.000 times,’ Muharrem says. ‘High EUV powers are necessary for EUV lithography. We showed, with our Fresnel design, that it is possible to recycle the unwanted light back to the light source. This is an equally important result, as it adds to the light source efficiency of generating EUV light.’ 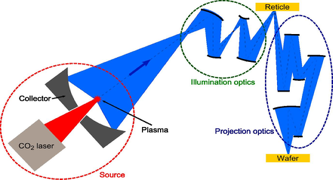 A CO2 laser is generating a plasma that is intensively emitting EUV light. This EUV light is directed by the collector and illumination mirrors to the reticle. The reticle is then imaged to the wafer by the projection mirrors.

Adaptive optics is useful to correct wavefront distortions, reflectance degradations and wavelength deviations. Here, piezoelectric films really work, as Muharrem was able to show experimentally as a proof of principle. The piezo film thickness can be adjusted by an externally applied voltage.

Making piezoelectric thin films - especially when deposited on glass substrates - is much more complicated than applying these materials in bulk. Therefore Muharrem used so-called nanosheets to grow the highest quality piezo films. These films showed record high response to applied voltages, especially when the film structure was forced to grow in columnar structures.

‘Industrial partner Carl Zeiss SMT showed great interest in my findings,’ Muharrem states. ‘My research was really interdisciplinary, involving the Industrial Focus Group XUV Optics of professor Fred Bijkerk, the Laser Physics & Non-linear Optics group of professor Klaus Boller, and the Inorganic Materials Science Group of professor Guus Rijnders. Fred Bijkerk and Klaus Boller were my promoters. It is a big advantage that all these expertise and equipment are united within the Mesa+ Institution.’

Muharrem published articles in Applied Physics Letters, Journal of Physics D: Applied Physics and Optics Express. Muharrem: ‘Now I am working on a post-doc project concerning spectroscopy aspects of EUV sources in order to characterize the spectral quality of different sources. In the future an academic career as well as an R&D job within industry appeals to me. Both are challenging, though in different ways. Electronics-engineering, optics, holography and 3D imaging are fields of research I am very much interested in. During the PhD project I’ve learned the basics of materials science as well, which can be of great use in future jobs.’ 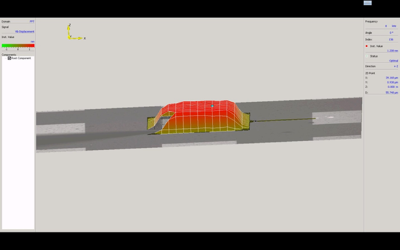