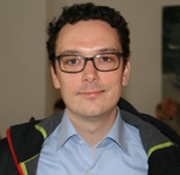 In this thesis a novel fabrication technique for manufacturing large-core silicon nitride (Si3N4) waveguides was investigated. Two nonlinear conversion schemes were considered: seeded four-wave mixing and supercontinuum generation. ‘In future a handheld lab-on-a-chip light source could be used in spectroscopy for bio and life science experiments,’ Jörn Epping says. ‘All colours were generated, using a simple laser-pump. Even more so, a wide-band supercontinuum spectrum was characterized. This means telecom applications are within reach as well.’

‘The silicon-nitride waveguides used are very small and vulnerable,’ Jörn Epping says. ‘The required thicknesses and material characteristics were produced by a specialized company, Lionix, an internationally renowned spin-off housed at the University of Twente.’

The requirements of the waveguides proved to be groundbreaking. It took until the last year of his PhD project before the product specifications were really met. Only then the required sizes could be produced in a stable and reproducible way. At first cracks appeared during the waveguides fabrication, as they had to deal with severe stress conditions in the material.

‘The main results, as described in my last three chapters, were written during the last year of my thesis work,’ Epping says. ‘These were well received in the scientific community. It made me forget the uncertainty I experienced in the start-up phase of the project, when the sample-waveguides were well beyond our reach. LioniX was able to push the limits and came up with some brilliant solutions.’

Designing the waveguides involved fundamental modeling and calculation techniques. Jörn tells he had to think ahead for about a half year in advance. ‘I learnt a lot regarding to the planning skills needed in a complex project like this,’ he says. ‘These will come in very useful in the future, be it in a job within academics or designing optical devices in industry.’

He collaborated on this project with Professor Carsten Fallnich, leader of the Optical Technologies Group at the University of Münster, his hometown where he resided during the PhD period, as the distance from the University of Twente is only sixty kilometers.

The expertise of Mesa+ also played a key role as well. Jörn: ‘The technicians were great, helping me to smoothen the surfaces needed for depositing silicon nitride. With the help of other experts I was able to generate high-quality electron microscope images. Skilled people and the availability of up-to-date equipment, are among the very strong points of Mesa+.’