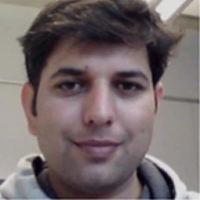 In this thesis the deposition of gold nanoparticles is carried out after evaporation of suspension droplets on various surfaces; and thereafter their characterization and self-assembly is investigated. The major nanoscale forces that dictate self-assembly processes in suspension are the well-known: Van der Waals attraction and electrostatic repulsion. These forces can be tuned accordingly, by playing with the shape and size of the nanoparticles.

Also the concentration of the solvent and the nature of counter-ions are relevant here. ‘The first months of my PhD-work, I spent on synthesizing the good particles to work with, in a highly controllable way,’ says Imtiaz Ahmad.

Phase separation is chosen in this PhD project as a strategy to study selfassembly events of different shapes and sizes. Therefore other forces have to be taken into account as well: depletion and steric interaction.

‘One cannot ignore the effect of evaporation conditions and capillary forces in self-assembly processes, and their role in the deposition of assembled arrays, close to the contact line,’ Imtiaz explains. Furthermore, packing and mixing entropic effects in concentrated and diluted suspension respectively, play a crucial role in order and disordered arrangements of deposited nano-entities as well.

Using other suspensions, Imtiaz studied the way nano-spheres and rods separate when dried. ‘I thoroughly studied literature, and on the basis of theoretical models we explained the phenomena as so many parallel questions are still open in this research area. Hydrophilic stabilizing effects I described, were published in Langmuir. Writing these articles is one of the skills I learned during the PhD-project, systematically presenting the data and imagining well what the reviewer demands: why do you say that in this section of the story?’

Imtiaz especially enjoyed cooperating with work students on highly ordered pyrolytic graphene: ‘They ask really clever questions which require sharp formulations to answer. Also: when you teach on a certain subject, you never will forget yourself. So, I benefited from that equally as they did.’

After the PhD-defence, Imtiaz plans to return to the University in Peshawar where he once worked before, as a teacher. And he taught graduate level physics as well.

‘I had no experimenting and research background at all when I arrived here at Mesa+,’ he says. ‘Also chemistry was slid back from my brain. Working in the nanolab, using a variety of equipment, with the helping hand of all friendly Mesa+ colleagues, made me an independent researcher within a period of four years. I am grateful for that.

‘In the future I hope to start a research lab on self-assembly involving various surfaces, arranging the lab and the equipment and hiring students to actually start research. Collaboration with other universities will be favourable, to promote knowledge transfer and to share equipment efficiently. This is especially important as we have to start from scratch, and our budget is limited.’