Quantum mechanical tunneling enables Scanning Tunneling Microscopy and Spectroscopy, to image and manipulate features down to the single atom scale. Using the apparatus in a different way – extracting information from a distance/voltage trace instead of the conventionally used current/voltage trace – high quality measurements results were obtained, making STS even more widely accessible. ‘While performing experiments during this thesis project, I was surprised on finding tunneling phenomena in liquid environments,’ says Chris Hellenthal.

The front cover of his thesis - titled “Material characterisation by means of alternative scanning tunnelling spectroscopy tools” - is a 3D representation of a copper sample, depicting the rectangular shapes Chris Hellenthal was searching for. ‘I am very fond of these beautiful pictures I worked on for quite some time, though they are not central in my thesis work,’ he says. ‘The specific step structure arises because of a chemical process only possible by using electrochemical STM. The rectangular shapes vary, averagely sized a few hundreds of nanometers by several tens of nanometers. I remember measuring these images as one of the key moments of my PhD.’

Another memorable moment was positioned some months before the very end of his work as a PhD, leading to one of his main results. Chris worked on alternative STS methods allowing him to perform experiments in electrochemical environments, unhindered by strict vacuum conditions or special hardware interventions. ‘While performing experiments in water and alcohol based liquid environments, I observed clear tunneling effects, or phenomena quite similar,’ he says. ‘I was really surprised by this, and very glad being able to characterize the exponential features, corroborating the tunneling effect was actually there.’ 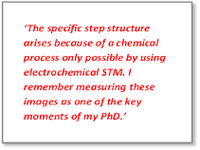 Here again the preparations for the experiments were the main part of the huge scientific efforts Chris had to undertake. When ready, the actual measurements only took two afternoons. Chris: ‘In order to analyze the data properly and come up with a coherent story for the last chapter, I was allowed to work on that in some extra time.’

Chris published his findings in leading journals such as: Physical Review Letters B, Royal Society of Chemistry (RSC) Advances, and Beilstein Journal of Nanotechnology. His first publication was a paper based on results obtained during his master’s assignment, working for the Physics of Interfaces and Nanomaterials (PIN) group already at that moment. 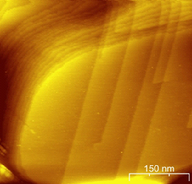 Chris: ‘During the PhD period my work shifted towards performing measurements using scanning tunneling methods as an independent researcher. I was able to explore the physical boundaries, and extended my knowledge towards electrochemical layers and samples, adding complexity as compared to performing experiments under vacuum conditions. The collaboration with the Mesoscale Chemical Systems group also contributed to further widen my horizon.’

Thinking about his future career Chris prefers a promising research environment in industry to a tough tenure track position in academics. ‘It would be a pity to be distracted too much from actual research by fringe activities, such as writing research proposals and teaching obligations. At this moment I prefer to go and work for a medium or small sized spin-off company. For example Demcon, here in Twente, has developed various exciting expertise products that appeal to me. In Eindhoven I also found some interesting companies I would be happy to apply.’