What was your thesis about?

The basis is the development of a capacitive position sensor with the aim for positioning of Micro Electro Mechanical Systems (MEMS). These systems often contain micro-actuators, which are tiny motors with micrometer-scale dimensions, which are used for the positioning of tiny lenses, fibres, or heads on hard disks. MEMS may play a part in life sciences, for instance in future DNA analysis and MEMS will play a major part in the future methods of data storage. Within five years or so the ongoing development of hard disks is at its end. MEMS play a part in new technology to increase the density of magnetic storage on the disk.

Within the field of MEMS-development, there is a division involved in micro actuators that position certain items, but so far without exactly knowing the range and accuracy of the actuator (open loop). We added to these micro actuators a position sensor, which in combination with feedback control (closed loop) will improve the performance of the whole system. This has been done before, certainly with macro-world applications. The new thing of our research was to implement it in a MEMS-device and arrive at nanometer accuracy within a range of 100 micrometer, which boils down to a 1:100.000 ratio. That is the long range mentioned in the thesis title. 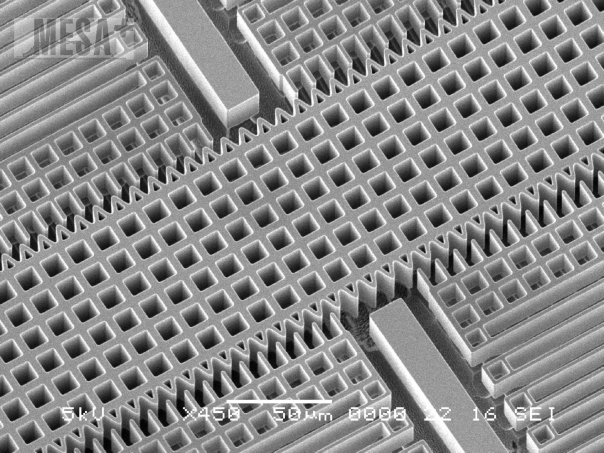 This research involved for me a completely new way of looking at things. If you work on a micro or nanoscale all kinds of unexpected things happen, surface forces become more important than gravity and that kind of thing. With my background of Control Engineering it was an eye-opener.

And also when working in the world of micro mechanics, the technology for me was completely new. MEMS are made with so-called micromachining technology, mostly out of Silicon material. This technology is derived from the Integrated Circuits (IC) technology and this requires a special laboratory with almost no particles in the air. That’s why such a laboratory is called a cleanroom laboratory. Working in the clean room of the Mesa+ institute was new too.

Can you just go and work in a clean room?

You do need a course. But after that it is a bit like cooking: carefully monitoring your processes, exactly knowing when to stop etc.

Yes, I did. But it is a special world in itself. And of course you are not the only one working in the clean room. And a tiny bit of inattention of co-researchers can spoil your carefully prepared and extremely critical process. And you never know beforehand if and how another person’s process interferes with your own. I have been lucky in that respect, but that kind of interferences do happen and are unavoidable in an R&D environment.

But on the whole I was extremely lucky to be at this university with the Mesa+ facilities, now we have been able to make things of our own design which we would not be able to do at any other university.

Did you experience set-backs in your research?

I think you always do. Mine was that I started work in the clean room relatively late, and had to deal with the conversion from 3 to 4 inch wafers, which involved major adaptation of our processes. It took a lot of time.

I enjoyed the subject very much. It has a multi disciplinary approach to it. You encounter aspects in the field of mechanics, chemistry, optics, physics and so on. And there is a practical side to the outcome, albeit in the future.

For the summary of the thesis, click here. (English/Dutch)