How do living cells compute? What do calculation and computing actually mean in nature? In his scientific work on chemical reaction networks, Albert Wong does not avoid these fundamental and rather philosophical questions. At the same time, he is working on basic interactions between enzymes that can not only perform a calculation task, but can even remember in what state they were before: they show the basics of the beaviour that also characterizes our brain, including memory. Would it be possible to create artificial intelligence in this way, based on a set of chemical reacties? Albert Wong demonstrates first steps in ‘Small’.

The 'Featured Scientists' page of the University of Twente has an interview with Albert Wong.

In our search for more powerful and, at the same time, less energy-consuming computing systems, scientists work on several alternatieves. Of the living cell, we actually don’t know much about how it does its calculations. Or, even a step back: what is computing, calculating in nature? Can molecules – the elementary building blocks of life – actually do something we call calculating? These are questions for which the answers are only in the beginning. In their new publication in ‘Small’, Albert Wong and his colleagues demonstrate that, based on a simple system of three enzymes, already a system can be realized that has properties that our brain has as well. Wong therefore sees opportunities for using these ‘chemical reaction networks’ (CRN’s) as a basis for neural networks.

He no longer works with classic ‘1’ and ‘0’ basis, but replaces this by dynamically changing loops ‘+’ and ‘-‘. Actually, the ‘circuit’ is based on the competition between a molecular fuel, an inhibitor and a catalyst. The fuel is trypsinogen, than there is the catalyst trypsin that is capable of clipping tails from enzymes, and there is the ‘trypsin inhibitor’ that can stop the clipping from happening. Trypsin, of these three, works as a catalyst. The dynamic behaviour starts at the moment that fuel and the inhibitor both compete for the catalyst. The chemical concentration curve resemble the voltage-current curve in electronics. Even this simple molecular system shows behaviour that looks like our brain does – ‘neuromorph’: it can return in its former state and it can adapt. 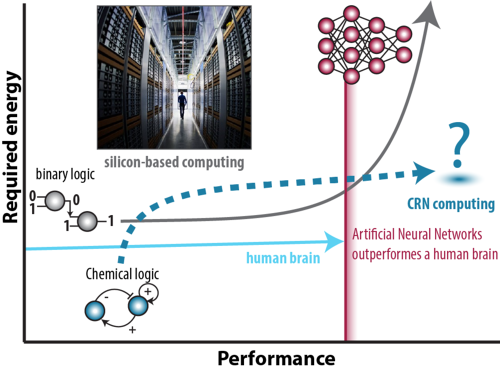 If this is already possible using a simple system existing of three enzyme reactions, Wong foresees that these are first steps on the way of using more chemical reactionsin low-energy information processing. At the same time, we learn more about learning and memory in nature – fundamental questions that Albert Wong likes to work on. The research of Albert is part of UT’s Centre for Brain-Inspired Nano Systems (BRAINS).

The paper ‘History dependence in a chemical reaction network enables dynamic switching’, by Dimitrii Kriukiv, A. Hazal Koyuncu and Albert Wong, was published in Wiley’s ‘Small’.