A guide for the materials selection of stacked nanoscale thin films

Complex stacks of thin films, with individual thicknesses down to the nanoscale, find usage in a variety of high-tech optical and electronical devices. These range from multilayer optics for the Extreme Ultra Violet to fast electronic circuits. Their performance is primarily determined by the thickness and composition of the layer interfaces and the atomic scale processes that occur at these interfaces. So far, finding successful materials combinations was a tedious job, basically done by trial-and-error production of different materials stacks.

PhD student Ani Chandrasekaran has discovered a materials guide to help select proper combinations of materials that result in optimal performance of the thin film devices. He showed that the effective interface width could be described as an exponential function of the surface energy difference between film and substrate atoms, with a subtrend based on the crystal structure of the layers. The model serves as a scaling law to predict the effective interface width and the layer closing thickness of transition metal layered systems.

In his thesis, defended online on November 16th 2022, the PhD candidate describes advanced experimental research on the physical and chemical properties of bilayer and multilayer ultra-thin films, including the use of state-of-the-art analytical techniques like low energy ion scattering (LEIS). The study focused on understanding the surface and interface diffusion mechanisms involved during near room temperature layer growth, and low temperature annealing of transition metal and Si based layered systems.

Anirudhan Chandrasekaran did his research in the XUV Optics group, initiated in 2013 by prof.dr. Fred Bijkerk in the Science and Technology Department. This PhD-defence marks the end of Bijkerk’s role as a PhD supervisor at the University of Twente. He coached 42 students to a successful defense of their PhD research. Currently he is acting as a science and valorisation advisor in the XUV group. Ani Chandrasekaran is now employed as a senior process engineer at ASM in Phoenix, Arizona, USA. The XUV Optics group, including Ani’s co-supervisor dr.ir. Robbert van de Kruijs, is currently led by prof.dr. Marcelo Ackermann. 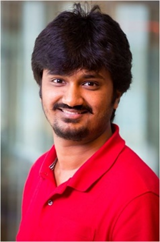