In her PhD research Federica Cioffi focused on four early hallmarks of Alzheimer’s Disease (AD): amyloid-beta (Aβ) aggregation and accumulation, oxidative stress and neuroinflammation. ‘These related themes, on protein misfolding, are in the line of research for several years already, at the Nanobiophysics (NBP) Group,’ Federica says. ‘Together with international partners, and by collaborating closely with other Mesa+ and University of Twente groups, we certainly create impact. International effort is indispensible in investigating this complex and multifaceted disease.’

In studying Aβ-aggregation, Federica collaborated with university groups in Napoli, Italy and San Luis, Argentina. ‘They provided us with compounds synthesized in their lab, especially designed for our specialized research,’ she says. In the second part of the PhD the ability of proteases to cleave Aβ was studied. ‘Using the mass spectrometer at the Mesa+ lab extensively, we were able to look at the fragments generated upon insulin-degrading enzyme cleavage of Aβ,’ she says. ‘We identified a new cleavage site. On this, we collaborated with the University of Innsbruck.’

In another part of her ‘multi-target research’ she reviewed literature on molecular mechanism that drive oxidative stress in AD. ‘Understanding those mechanism and identifying markers that target oxidative stress, may help preventing neuronal damage,’ she explains.

In the last part of her PhD, Federica carried out research in the lab of Nobel Laureate Randy Schekman, at the University of California, Berkeley, aimed at understanding the link between neurodegeneration and neuroinflammation. ‘I was awarded a grant by Alzheimer Nederland, for which I am very grateful,’ she says. ‘I found some extra evidence on experiments I performed earlier, on the release of cytokines from microglia cells of the brain.’ 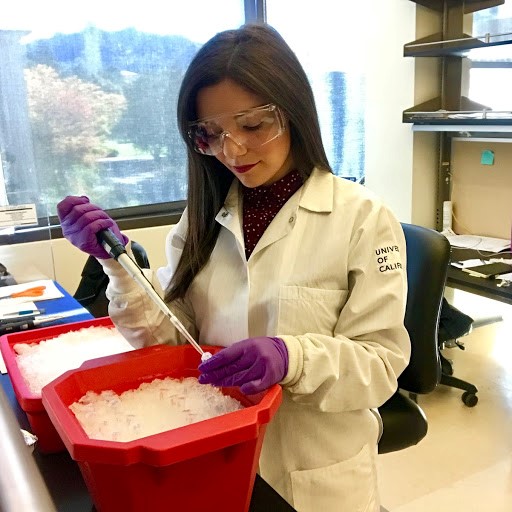 According to Federica, the research, led by her supervisor dr. Kerensa Broersen, is well embedded within the University of Twente. ‘For example, the expertise of dr. Jos Paulusse’s team, at the Biomolecular Nanotechnology Group, is useful as they are able to design nanoparticles as a carrier of drugs towards the brain,’ she says.

‘This work is a great addition to the team led by dr. Loes Segerink, from the BIOS Lab-on-a-Chip Group. With the blood-brain barrier chip, one can simulate and test the passage in early stages of research already, to see if nanoparticles are able to cross this blood-brain barrier in the first place. Using the international standing and networks of these groups, a medium sized University such as in Twente, can make important contributions in the field of AD research.’

In her current job Federica uses her experience as a researcher in an international setting, performing an intermediate task at the research-based pharmaceutical company Cell Signaling Technology (CST). ‘We aim on providing and designing antibodies and reagents for research, on a wide range of human diseases. In the Scientist to Scientist program of CST, I actively link researchers all over the world, in order to strengthen their individual programs. I am happy to contribute, bringing medical research from the lab to industry, and ultimately to the patients in need.’