Carola Engbers is a PhD student in the Biomechanical Engineering group. Her supervisors are prof.dr. J.S. Rietman from the faculty of Engineering Technology (ET) and prof.dr. D. de Waard from the University of Groningen. 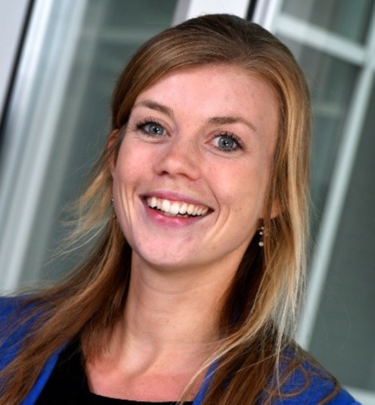 In the Netherlands cycling is important, there are even more bicycles than people. For the older population, cycling is one of the most important physical activities to remain healthy and mobile. Cycling contributes positively to health, mobility, and quality of life and staying mobile is crucial for maintaining a social life. However, older cyclists (60+) also have a higher risk of falling with their bicycle and sustaining a serious injury, compared to younger cyclists. Injury jeopardizes the mobility of this person, with severe consequences, such as depression and feelings of loneliness. Hence, prevention of bicycle accidents of older cyclists is obviously necessary.

In this thesis, the main aim was to investigate how technology can support safe and comfortable cycling to support the older cyclists (60+) in traffic. In Chapter 1, the key research topics of this thesis are described, as different factors affect cycling. The first topic covers the characteristics of older cyclists. The second topic focusses on technology related to the bicycle to support older cyclists; what are their wishes and requirements and specifically, how do older people respond to these types of technologies. The third topic covers the interaction of cyclists with other road-users and the communication with them. ‘Safe and comfortable’ cycling, emerges in the overlapping area between the three topics. The following objectives are described as part of the main aim.

Objective 1: To investigate demographic, physical and mental characteristics of elderly cyclists, and to explore which factors are associated with self-reported cycling accidents in the Netherlands.

Objective 2: To investigate how technology can support safe and comfortable cycling for the older population.

Objective 3: To improve the interaction between older cyclists and other road-users with technology.

As it is important that technology is targeted at the end-users, it is crucial to continuously involve the older cyclist in this development process from the beginning. The research in this thesis therefore starts with investigating the wishes, needs and limitations of the older cyclists. In Chapter 2; demographic, bicycle and personal characteristics of older cyclists were revealed, and it was explored which of these factors were associated with self-reported cycling accidents from age 59 in the Netherlands. This study focussed on exploring demographic, bicycle and personal factors related to self-reported bicycle falls, instead of focusing on accident characteristics.

More than eight hundred older cyclists (>65 years) filled out a questionnaire, which included questions on demographics, bicycle specifications and personal characteristics. By means of a logistic regression, the relationship between personal factors and self-reported bicycle falls were studied. From the multivariate model it was concluded that four characteristics of the older population and self-reported factors are associated to an increased risk of a fall accident: increasing age, experiencing mental impairments, lack of cycling confidence and living in a rural environment.

However, even though older cyclists experience problems in traffic, they are at the same time excellent and experienced in avoiding many of these problems. Even though this compensation strategy can be very effective, it can be questioned whether this is the best solution for them. This thesis looks further than the traditional ways of supporting the older cyclists in their limitations. Supportive technology, comparable to Advanced Driver Assistance Systems (ADAS) in cars, could be a potential solution for the older cyclists to cope with their limitations, which makes cycling more comfortable and may reduce injury risk for the older cyclist in traffic. With supportive technology, the need to rely on less effective compensation strategies, such as relying on hearing, could be reduced or eliminated.

Pursuing objective 2, studies were conducted to investigate how technology can support safe and comfortable cycling for the older population. In the following chapters, results are described from studies that were conducted to investigate if and how technology that helps older cyclists deal with a situation that is potentially difficult for them, is accepted, and what their effects are on mental workload and behaviour.

In Chapter 3, a simple prototype rear-view assistance system was designed, to warn for trafficapproaching from behind, and tested in a lab-environment. In this way, an older cyclist could experience this kind of supportive device in a safe setting. Before actually developing technological devices, it is crucial to take the opinion and experiences of the targeted end-users into account. Turning left on a crossing is in particular considered as a problem by older cyclists (in right-hand drive countries), as older cyclists may have difficulty looking over their shoulder due to stiffness of the neck. To increase the opportunity for older cyclists to continue cycling & safely for as long as possible, a solution other than a mirror, that can inform about traffic approaching from behind, was therefore considered. A so-called rear-view cycling assistance system could eliminate the need to look over one’s shoulder or in a mirror. The rear-view assistance was evaluated on the effects on behaviour, mental effort and acceptance. This supportive technology warned the cyclist, on a simple cycling simulator, for traffic from behind by LED lights on the steering wheel or by vibrating handlebars. The warning (haptic or visual) was given based on the traffic situation that was behind them, independently of the turn instructions. Thus, if participants were asked whether they could turn right and there was traffic from behind, they were accordingly informed visually or haptically in both experimental conditions, but not in the control condition. Significantly more correct decisions regarding a safe left turn were made with system advice and less mental effort was reported when using the rear-view assistant. The warning signal by vibration handlebars was evaluation more positive than the led-lights warning signal. It was concluded that the electronic rear-view assistance system can potentially support the older cyclist successfully by warning for traffic coming from behind, without increasing their mental effort. This study gave a first indication of use and acceptance of a rear-view assistant system that supports older cyclists in detecting traffic from behind.

Giving information about, not only, traffic approaching from behind, but also from the front, could make cycling more comfortable and may reduce injury risk for the older cyclist. In this case, cyclists then become aware of others, from both directions in time. A front-view assistant can detect other road users earlier than older cyclists, in particular when they are distracted, and this is likely to reduce startle reactions resulting in sudden deviations that could cause a fall. In Chapter 4, an instrumented bicycle, with a front- and rear-view assistant, was evaluated on technical performance, user-experience and effects on lateral position under more realistic settings. Vibrations in the saddle were used to convey the message that someone coming up from behind was detected and vibrations in the handlebars were used to communicate that somebody was approaching from the front. The results indicate that both systems can support older cyclists successfully without increasing mental effort. Both assistants received positive evaluations, although the rear-view assistant was experienced as more useful. This chapter also presented the results in cycling behaviour; using the front-view assistant resulted in less lateral distance to the approaching cyclist, while the use of the rear-view assistant did not have effects on lateral distance. In conclusion, this study demonstrated positive effects of rear- and front view assistance on mental effort, acceptance and lateral distance in a moderately semi- controlled setting.

Finally, it is important to improve communication between road-users. Moving towards objective 3, it was investigated if and how interaction between the older cyclists and other road- users could be improved. Although older cyclists run a relatively high risk to be involved in single-sided accidents, other road users have been related to such single-sided accidents. Chapter 5, therefore describes the results of a Bicycle Light Communication System (BLCS), which was developed to improve the communication of intentions and behaviour of cyclists to other road users. This system consisted of a light system integrated in the front- and rear light, which communicated intentions and behaviour, such as acceleration, deceleration and turning. This turning indicator eliminated the necessity to signal turns by extending the arm.

In an on-road experiment, 21 older and 20 younger cyclists observed the light signals while performing several (cycling) tasks. In addition, twelve older cyclists used a BLCS-instrumented bicycle for their personal cycling activities during one week. A BLCS that allows a cyclist to communicate his or her intentions, and therefore facilitates other cyclists to anticipate their behaviour, seems to be a promising concept. Turning indicators and brake lights can display valuable information of a cyclist’s behaviour that might otherwise be less explicitly visible and was evaluated positively by older and young cyclists. The cycling speed signals were found difficult to interpret.

Finally, Chapter 6 provides an overview of and highlights the most imported findings. It provides a discussion of the results of this research and furthermore it placed the results in a broader perspective with highlighting relevance for practice as well as for future research. Additionally, limitations of the studies in this thesis were discussed. Here, it was shown that technology should work flawlessly, so it does not undermine safety-effects.

In short, this thesis has generated knowledge on characteristics of the older cyclist and how technology can support safe and comfortable cycling for the older adult. The overlap between three topics was explored: the cyclist, technology, and the interaction with the cyclist’s environment. Several factors were associated with self-reported falling of the bicycle; age, mental impairments, being less than completely confident and living in a rural environment. To compensate for some of these physical and mental impairments, assistive technology was developed to support the older cyclists in traffic. These supportive technologies have potential to lead to more comfortable cycling for the older adult, as the supportive devices were evaluated very positively. The advantages for the older cyclist are promising.

Carola Engbers is a PhD student in the Biomechanical Engineering group. Her supervisors are prof.dr. J.S. Rietman from the faculty of Engineering Technology (ET) and prof.dr. D. de Waard from the University of Groningen.