What does a moth have to do with high tech? More than you would think, as it has two very sensitive antennas on its head that form a very sensitive smelling organ. These enable him to navigate and find a partner. How is it possible that a minimum of pheromone molecules is sufficient for that? Researchers of the University of Twente found out more about the shape of the antennas and their efficiency at various flight speeds – the moth have to avoid flying too fast. The moth, in this way, teaches some lessons about nature-inspired microsensors, according tot he paper in the Proceedings of the National Academy of Sciences.

The two pectinate antennes on the head of a butterfly are essentially very complex olfactory organs. The visible braches, rami, in turn have very tiny hairs that are called sensilla, with a diameter of about 3 micron. This gives a structure that can capture pheromone molecules from the air, the sensilla will use it to pass chemical information to the moth’s neural system for choosing its path. Now what can we learn from nature, in case we want to develop sensors with those amazing qualities? The researchers examined the shape and the effect of speed of air in relation to the antenna. It gets clear that the ‘navigating qualities’ of the antennas do not work well if the speed is too low or too high. For the best performance, the moth has to fly at moderate speed. 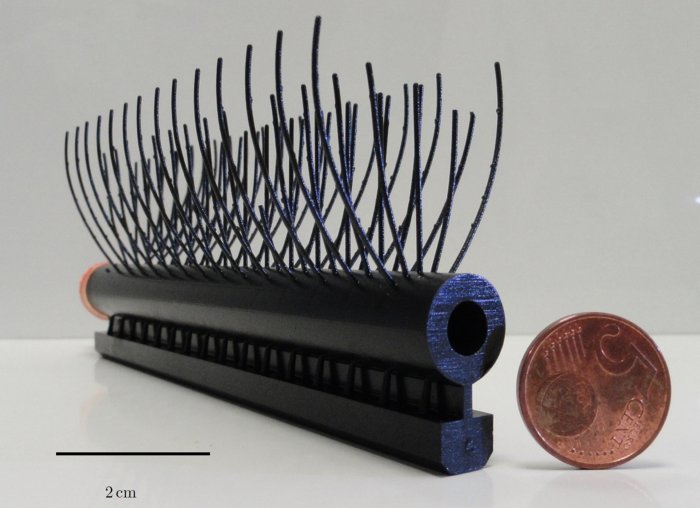 Rami and sensilla, 3D printed on a higher scale

The species that is used in this research is the Samia cynthia. After measuring the sizes of the antennas of this moth, the researchers 3D printed one ramus section including the semilla, for experimenting at various speeds. One of the main conclusions is that ‘leakiness’ plays a major role at the success ratio. It is about the amount of air passing through the antenna structure in comparison with the maximum amount that would be feasible. The speed at which a moth flies is between 0,5 meter/sec and 3 meter/sec, but there is clearly a capturing optimum. Moving fast, there will be a higher flow of air through the structure of the antenna, but the pheromones do not reach the sensilla, as the 'last part' has to be done by diffusion. There is simply not enough time for that during the time the pheromones travel through the antenna. Flying slower is, for that reason, most effective.

Previous research showed that the tips of the semilla enhance the capturing, as they together form a sort of ‘olfactory lens’. The assumption was that this has to do with the physicochemical behaviour at the tip’s surface. According to this new research, it is explained by mass transport conditions instead. There are several types of mico and nano sensors that use arrays of cantilevers, for which nature is source of inspiration.

The research has been done in the Robotics and Mechatronics group of the University of Twente (Prof Gijs Krijnen), together with the Institut de Recherche sur la Biologie de l’Insecte in Tours, France.

The paper ‘Insect pectinate antennae maximize odor capture efficiency at intermediate flight speeds’ by Mourad Jaffer-Bandjee, Thomas Steinmann, Gijs Krijnen and Jérôme Casas, is in the most recent edition of the Proceedings of the National Academy of Sciences of the USA.