UT professor Vanessa Evers is ready for her new challenge. This summer she will be leaving for Singapore, for at least a year, to take up her post as new director of the recently established Institute of Science and Technology for Humanity (NISTH) at the renowned Nanyang Technological University (NTU). During her sabbatical, Evers will be aiming to link her personal ambitions to those of the UT DesignLab. “A unique opportunity to use science for the benefit of humanity, so it was impossible to say no.”

What is the role of humanity in the 21st century? And how can we prevent the rapid development of technology and artificial intelligence doing more harm than good?
It is questions of this kind that feature prominently in the work of the institute of which Vanessa Evers will be in charge from August. It was set up in March, but she had already been approached for the position of director before that time. In Singapore, she will be working across disciplines more than ever in order to find the answers to the above questions.
“Examples that come to mind include linking physics, robotics, neuroscience, or design, with humanities disciplines such as language and culture. As far as I am concerned, that is the future. The NTU is very strongly positioned to bring these scientific disciplines together with governments and industry. At the institute, I will be getting the opportunity, on a large scale, to steer the development of new technologies for improving society. A unique and very special opportunity.”

Evers will be at a relatively young university which, in recent years, has shot up in all the worldwide rankings. NTU is now up there with the most prestigious universities in the world, like MIT, Stanford, and Harvard. In the well-known QS Rankings, NTU is number 1 in the ‘top 50 under 50’. The international advisory committee was unanimous in approving the nomination of Evers, who was showered with praise by Singaporean minister Tharman Shanmugaratnam at the time of her inauguration.
The committee lauded her work in the field of interaction between humanity and machines and the creation of societal impact through science. Evers: “The nomination was a great honour. With regard to scientific impact, NTU is among the world’s leaders, but its societal impact could be much greater. That is where the greatest challenge lies for me. These types of list are all well and good, of course, but how can we really deploy science to save humanity - that is what it’s about. With developments like Industrie 4.0, the major changes in how we live, work, and play will oblige us to identify the difficult questions that require answers. It means we have to work together on the differences that tend to divide us, so that humanity can enjoy a great future on our vulnerable planet,” said Evers at the time of her inauguration.

As well as her own personal ambitions, there is another big reason for embarking on this adventure - the continued development of the UT DesignLab. The DesignLab, which was launched in 2014, is a platform for multidisciplinary collaboration and creativity, aimed at design teaching and research. It brings students, scientists, government bodies, companies, and social organizations together. Evers is a co-founder and co-director of the DesignLab.
“We have taken great strides, but the challenge now is to secure and carry out large-scale global research projects, rather than being facilitators and bringing people together. The honeymoon period is over, and we now have to make more carefully targeted choices in order not to stray too far from the scientific arena. For that, we need networks of like-minded institutes, such as those of Stanford, MIT, and the NTU. The interest of NTU increases now. One way for me to set up a useful international network for the DesignLab is to do so from the outside - from the inside, it’s very difficult. I hope that the DesignLab has found, in NTU, a partner for global issues with international partners and a global impact.” 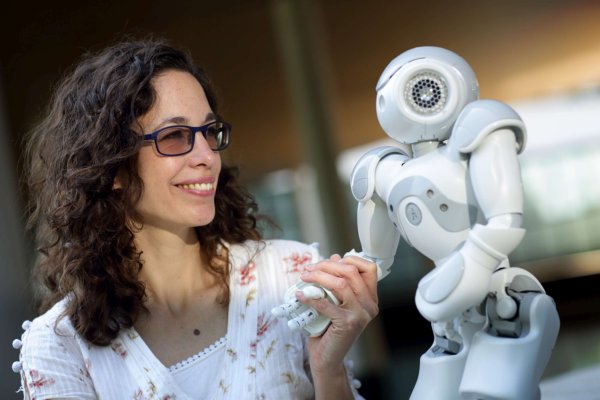 The first bridge towards that goal will be crossed later this year. The UT and the NTU are preparing a memorandum of understanding (MOU). Of the MOU, Evers says, “NTU has been able to see for itself how, for example, we at the UT collaborate with Novel-T. They would like to give students from Singapore the opportunity to be involved with Twente start-ups. They are not yet familiar with this bottom-up way of working, but they find it very inspiring.”

Evers will be relocating to Singapore this summer with her family. “An exciting step, from a personal perspective as well of course, but we have every confidence in this adventure - one from which we will hopefully learn so much. The food’s great in Singapore, too, so that is an added bonus!”