Controlling and probing charge carrier spin polarization in semiconductors via electrical means is an attractive route towards the development of practical semiconductor spintronic devices, which are expected to have a strong impact on future information processing and storage technologies.

Artist impression of a spin transistor. Spin polarized carriers flow in the gated channel between the ferromagnetic source and drain. The magnetization orientation of the ferromagnets affects the current and introduces a non-volatile memory effect. A practical spin transistor has not yet been developed.

Considerable success has been obtained over the last number of years in the field of inorganic semiconductor spintronics, with the demonstration by our group of, for example, the creation and detection of a robust spin polarization in silicon at room temperature. For more information, see “Electrical creation of spin polarization in silicon at room temperature”, S.P. Dash, S. Sharma, R.S. Patel, M.P. de Jong, and R. Jansen 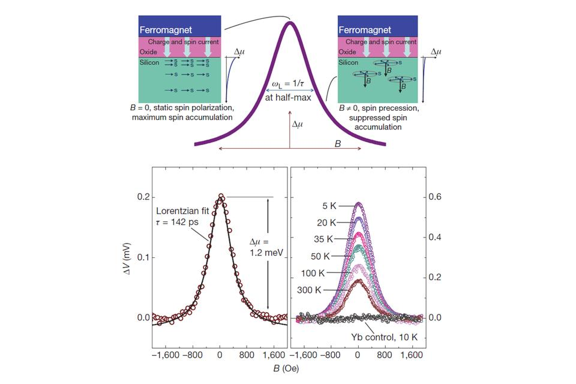 Key to this success is the growing understanding of the physical mechanisms that govern the spin-dependent behavior of charge carriers in ferromagnetic-metal / semiconductor heterostructures, and in particular of the practical limitations for spin-polarized charge carrier injection and detection using ferromagnetic metal contacts. The latter is known as “conductivity mismatch”, which applies to the diffusive transport regime.

In the NanoElectronics group, we study several promising candidate systems for spintronics based on carbon-based materials and ferromagnetic metals for spintronics, which are outlined below. For a general introduction to the field, see “Organic Spintronics”, W.J.M. Naber, S. Faez and W.G. van der Wiel, J. Phys. D: Appl. Phys. 40 (2007) R205.

It remains unclear, however, how spin-polarized charge transport takes place in these devices on a microscopic level. We study spin valves with ultra-thin organic semiconducting C60 layers, in which the transport is relatively easy to model, via multi-step tunneling processes. In this regime, charge carriers tunnel via a limited amount of steps involving localized intermediate states in the organic semiconductor. C60 is an attractive choice for spintronics: Since C­60 molecules are purely composed of carbon, and the 99% 12C isotopes have zero nuclear spin, the effects of hyperfine fields on the spin polarization of charge carriers are very small.

The magnetoresistance as function of C60 thickness <10 nm is well described by a model that considers two-step tunneling processes. The squares/circles are measured data points, the dashed lines are model calculations.

It turns out that multi-step tunneling leads to a behavior analogous to conductivity mismatch in diffusive semiconductors like Si, in the sense that the inclusion of an increasing number of intermediate tunneling steps results in a more and more spin-independent junction resistance, regardless of the spin lifetime and spin diffusion length. This previously overlooked fact places numerous published studies on organic spin valves in an entirely new light, and provides new design rules for organic spintronic devices.

Carbon spintronics with graphene and graphite

Graphene is a highly promising material for spintronics due to its intrinsically weak spin-orbit coupling and hyperfine interaction, which translates into a long spin lifetime. Since graphene also exhibits an exceptionally high carrier mobility, spin polarized carriers travel over very long distances before the spin orientation is lost.

We study interfaces between graphene/graphite and ferromagnetic metals, which are essential for optimizing the injection and electrical read-out of spin-polarized carriers. As has been shown by our collaborators, the Computational Materials Science Group at MESA+, a perfect spin filtering due to k-vector conservation is possible in theory at epitaxial interfaces of Co (or Ni) and graphene/graphite. This is due to the fact that the only states available at the Fermi surface of graphene/graphite reside at the K-points, for which only minority spin states of the ferromagnets are present. We explore practical routes towards engineering such interfaces.

Atomic resolution STM image of Co adatoms adsorbed on graphite. The bright spots encircled in light pink refer to individual Co adatoms that were adsorbed on the b-site of the surface graphene layer, whereas those captured in light green correspond to Co tetramer formed by four Co adatoms. Three of these adatoms occupied the b-sites and the fourth adatom attached to either the a- or the overbond-site. The label H indicates the hollow site. For more information, see: “Growth mechanism and interface magnetic properties of Co nanostructures on graphite”, P. K. J. Wong, M. P. de Jong, L. Leonardus, M. H. Siekman and W. G. van der Wiel,
Phys. Rev. B 84 (2011) 054420.

Interfaces between organic semiconductors and ferromagnets

The microscopic mechanisms governing the magnetotransport behavior in organic spintronic devices remain poorly understood, in part due to the often ill-defined hybrid interfaces in the devices. This understanding may be improved upon exploiting the electronic structure and magnetic properties of well-defined interfaces between ferromagnetic electrodes and organic semiconductors.

We study such well defined interfaces, for example C60/bcc-Fe(001) for application in organic spin valves. X-ray absorption spectroscopy and x-ray magnetic circular dichroism measurements show that hybridization between the frontier orbitals of C60 and continuum states of Fe leads to a significant magnetic polarization of C60 π*-derived orbitals. Both the magnitude and the sign of this polarization were found to depend markedly on the excitation energy, leading to oscillatory behavior near EF.

This demonstrates the possibility of controlling the interfacial spin polarization at well-defined hybrid interfaces via chemisorption, which is an essential ingredient for systematically engineering the performance of future organic and molecular spintronic devices. This is an ongoing theme in our organic spintronics research.