In the field of silicon quantum electronics we study the quantummechanical behavior of individual spins in silicon. Control and manipulation of the corresponding spin states can be lead to applications in quantum computation. To this end we isolate electrons or holes on (artificial) atoms through spatial and electrostatic confinement. In our experiments we perform a.o. energy- and magnetic spectroscopy in electron transport measurements at low temperatures.

Four approaches to study single spins in silicon: we isolate individual electrons and holes, either in real or artificial atoms.

Click here for a direct link to our publications.

Among other proposed physical realizations for quantum information processors, semiconductor-based qubits belong to the most popular suggestions. In particular, electron spins in quantum dots (QDs) have received considerable attention, and significant experimental progress has been made since Loss and DiVincenzo presented their original proposal, see Phys. Rev. A 57, 120 (1998). Experiments on lithographically defined QDs in GaAs/AlGaAs heterostructures have shown qubit initialization, single-shot single-electron spin read-out, and coherent control of single-spin and two-spin states. The strong hyperfine and spin-orbit interaction in AlGaAs/GaAs QDs limit the spin coherence time in those materials. In silicon, extremely long spin relaxation (T1) and coherence times (T2) are expected. Recently, a direct measurement was performed of the T1 of a single electron in silicon, which is ~6 seconds at a magnetic field of 1.5 Tesla, see Nature 467, p. 687 (2010).

We aim at controlling the spin states of individual electrons in silicon double quantum dots (DQDs) with the ultimate goal of realizing silicon single-electron spin quantum bits as building blocks for future solid-state quantum computers, see e.g. Nature 464, 45-53 (2010). Although important progress has been made over the last few years, it is not trivial to define QDs in Si. The main issues are the large effective mass of the charge carriers and the sensitivity to disorder, resulting in carrier localization on short length scales, and thus multiple QDs connected in series. The most successful systems for n-Si QDs are etched silicon-on-insulator structures, two-dimensional electron gases in Si/SiGe heterostructures and at Si/SiO2 interfaces (planar quantum dots), and bottom-up grown nanowires.

In the NanoElectronics group we use two material systems to isolate single electron and hole spins in Si QDs: 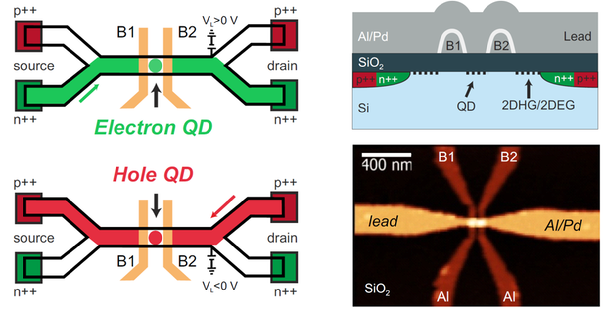 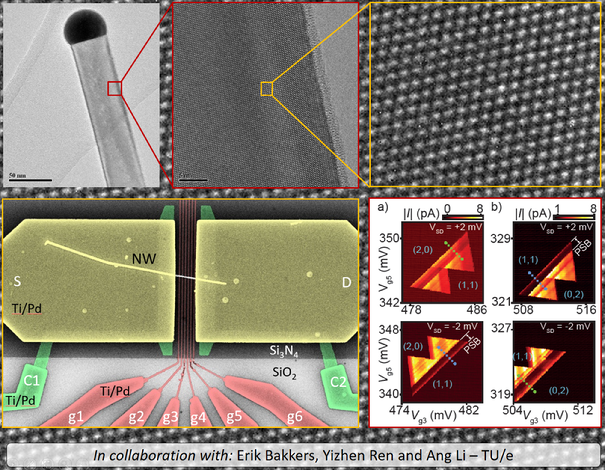 In the past years, science has shown great interest in semiconducting crystalline nanowires, cylinder-shaped wires with aspect ratios of 1000 or more. Nanowires have diameters up to tens of nanometers and can be tens of microns long. Their strength lies in the precisely controlled and tunable chemical composition, structure, size, and morphology. The high degree of freedom in nanowire synthesis allows epitaxial growth of heterostructures in both the radial and longitudinal direction. The doping in nanowires can be varied during growth, to make for example pn-junctions within a single nanowire to create LEDs.

Nanowire quantum dots. (a) Microscope image of a Ge nanowire sticking to the tip of our micromanipulator. Ge, Si and Ge/Si nanowires are grown at Eindhoven University by the Vapor-Liquid-Solid growth mechanism, see here. After synthesis the nanowires are deposited on an oxidized silicon substrate with predeposited bottom gates. In a subsequent fabrication step, source (S) and drain (D) contacts are evaporated on top of the nanowire, see (b) for a schematic cross-section and (c) for a top view of a real device. Voltages applied to the bottom gates are used to create a quantum dot, and control both charge occupation and tunnel barriers.

The design with three layers of gates allows control of all QD components: the QDs themselves, the tunnel barriers and the densities of states in the reservoirs. In collaboration with the group of Prof. Dzurak at the University of New South Wales, we are further developing the Si QD technology towards few-electron double quantum dot devices, see figure below.

Pauli spin blockade in a many-electron Si metal-oxide-semiconductor (MOS) double QD. (a) Scanning electron micrograph (SEM) image of a highly tunable single electron Si/SiO2 DQD. (b) Schematic cross section of the Si MOS double quantum dot. The architecture is defined by barrier gates B1, B2 and B3, lead gates L1 and L2, and plunger gates P1 and P2. The gates are separated by an Al2O3 layer (light gray). (Right boxes) At positive bias the current is fully suppressed by spin blockade (green star box). Figures from Scientific Reports 1, 110, (2011).

The number of electrons (m,n) on the left (m) and right (n) QD can be reduced by decreasing the gate voltages, but then the tunnel barriers become less transparent and currents too low to measure. Due to the tunability of this device we are able to counteract the loss of barrier transparency by increasing the barrier gate voltages, resulting in a measurable current through the QD down to the last electron in both QDs.

After having found the (0,0) regime in transport, it is straightforward to move to the (1,1) (0,2) transition. Here, Pauli spin blockade manifests itself: transport will always be possible from (0,2) to (1,1), no matter whether the (0,2) forms a triplet (T) or a singlet-state (S), see Figure above. However, when the bias voltage is reversed, transport will be impossible at low bias due to Pauli spin blockade: If the (1,1) state is a singlet, an electron can tunnel through via the (0,2) singlet-state. However, if the (1,1) state is a triplet-state, transport will be blocked since the (0,2) triplet-state is much higher in energy and a transition from T(1,1) to S(0,2) would require a spin-flip. 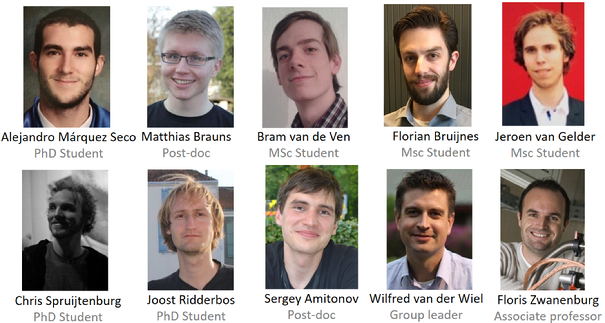 Collaborations, past and present