Getting your doctor’s degree with the names on it of both the University of Twente and the University of Münster (WWU), after you did research in both university labs: this will be possible now that the Rectors and responsible Deans of both universities signed an agreement. In the meanwhile, already three PhD students are working within such a ‘Joint Doctorate Program’.

“By doing your research at both the University of Twente and the University of Münster, PhD students will not only enhance their scientific ‘tool box’, but they will also get to know the subtle differences in our cultures. And above all: they will seed the plants for lifelong professional and personal connections”, said Professor Wilfred van der Wiel in his openingsword. At UT he is a Professor of Nano-Electronics, at WWU he is a part-time Professor as well. Recently, he joint a German collaboration on Intelligent Matter, in which his own Center for Brain Inspired Nano Systems (BRAINS) participates as well. Now, three joint PhD students work in this. The first step was that partly Dutch research could be funded by the German ‘Forschungsgemeinschaft’. 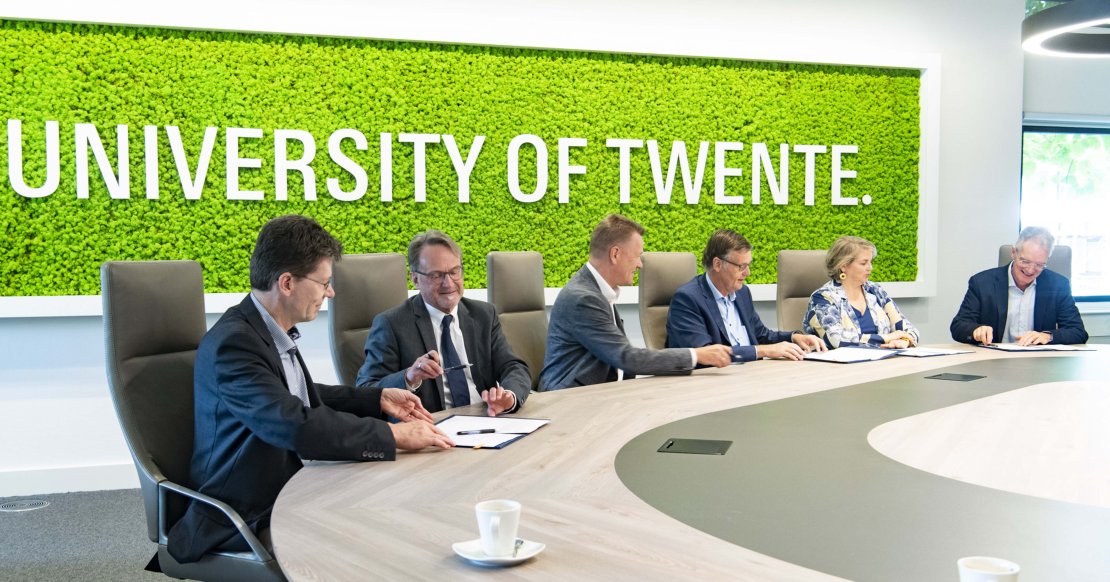 Van der Wiel “For these students, the MESA+ NanoLab sometimes has equipment and support that is not present in Münster, but in the same way, I see our students taking their samples, travel to Münster with it and do tests with in, for example, the Centre for Soft NanoScience.”

Having PhD students collaborate across borders, is a great ‘bottom-up’ way of interuniversity collaboration that is now ratified ‘top-down’ using a good set of rules. Sometimes the lab facilities are complementary, and new ways open up in this way. The main thing is that you get to know more viewpoints, by working at both sides of the border. These new connections are valuable.  "Human glue is sticky:", according to Professor Van der Wiel. There certainly are some issues in terms of rules and regulations on both sides. For example: who is responsible in the end, for the PhD thesis, who should be in the supervisory committee? These are differences that can be solved, as the new framework agreement demonstrates.

Earlier on, both universities initiated the ‘collaboration grants’, relatively small interuniversity research projects that can act as a flywheel for more collaboration. Wilfred van der Wiel also started with one of these grants. University of Twente Rector Tom Veldkamp considers the joint PhDs as a true boost for further collaboration.

For more information on the joint PhD possibilities: Margriet Dekkers.