Due to the COVID-19 crisis measures the PhD defence of Róbert Ukropec will take place (partly) online in the presence of an invited audience.

Róbert Ukropec is a PhD student in the research group Nano Electronics (NE). His supervisors are prof.dr.ir. W.G. van der Wiel and prof.dr.ir. F.A. Zwanenburg from the Faculty of Electrical Engineering, Mathematics and Computer Science (EEMCS). 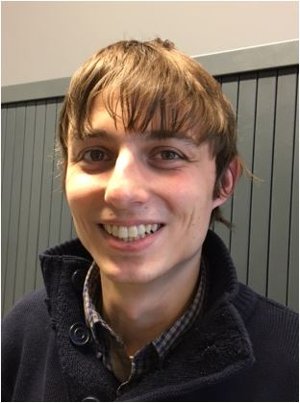 High-frequency silicon acousto-electronics are a stepping stone into a new field of research named quantum acoustics, an analogue to quantum optics on a chip. One of the main tools used in this novel field are surface acoustic waves (SAWs), which are very versatile surface strain waves used today in RF filters, gas sensors, and within quantum acoustics as phonon sources and for semiconductor band-gap modulation. It is this modulation that enables SAWs to capture and drag free carriers in what is called acousto-electronic transport (ACT).

SAWs are excited with an interdigitated transducer (IDT) on a piezoelectric substrate via the inverse piezoelectric effect. The finger width of an IDT determines the SAW wavelength and together with the substrate sound velocity, the SAW frequency. Until recently, GaAs has been the material of choice for acousto-electronic experiments because it is intrinsically piezoelectric and together with AlGaAs forms a two-dimensional electron gas (2DEG) that can be processed using well established lithographic methods. Silicon, on the other hand, is the main workhorse of the semiconductor industry and for quantum electronics research it is interesting for its long electron spin lifetimes. Unfortunately, silicon is not piezoelectric and needs additional processing in the form of piezoelectric thin-film deposition, most commonly ZnO or AlN, to be useful for ACT devices.

In this work, we explore the functionalization of silicon with ZnO thin-films for high-frequency SAW acousto-electronic transport, facilitated via small-wavelength IDTs fabricated by nano-imprint lithography. High frequencies are desirable for quantum acoustics to enter the quantum regime at low temperatures and more in general due to increasing demand in the RF industry for higher bandwidth in communication technologies.

In Chapter 2, a photon [VH(1] [UR(2] detector is chosen as the benchmark silicon ACT device. The device is fabricated using nano-imprint lithography (NIL) defined IDTs, with feature sizes down to 65 nm, on a SiO2 capped ZnO/SiO2/Si multilayer system. Its function is simple in design, a laser generates excitons in the silicon substrate, which are then dragged by a traveling SAW to a biased, planar, doped-silicon diode, where they recombine and are detected as excess dark current. In practice, however, it is shown that ACT device fabrication, which involves many different environments and processes, damages the piezoelectric thin film and leads to poor transmission of SAWs along the substrate surface. Cooling the sample down to cryogenic temperatures with liquid helium does not improve the SAW transmission, nor the measured dark current at the silicon diode. A trigger and timing electrical setup is then used [MdJ3] to lower the EM interference at the diode originating from the transmitting IDT. Unfortunately, no dark current signal emerges from the background noise of the biased diode and we conclude that the propagating SAW is simply not strong enough to bring a detectable number of excitons to the detection diode.

A closer look at ZnO thin-films is shown in Chapter 3. We analyze ZnO thin-films deposited on SiO2/Si via three different methods, sputtering, pulsed-laser deposition and sol-gel spin-coating. A structural and surface properties comparison between the films is carried out using X-ray diffraction (XRD), scanning electron microscopy (SEM) and atomic force microscopy (AFM). XRD shows alignment [MdJ4] of all three grown thin-films to the (002) crystal direction, however, the sol-gel thin-film orientation was the poorest of the three. Surface properties differ substantially according to AFM, where the sputtered ZnO is shown to be the least rough and uneven and, thus, most suitable of the three thin-films for SAW devices. However, the SEM images of the surface reveal missing grains and large pinholes [MdJ5] within all three films. Even more, the sol-gel film is shown to be quite porous.

An acoustic characterization is carried out with vector network analysis (VNA) of NIL IDT delay lines and shows that the sputtered and PLD ZnO thin-films readily excite SAWs, while the sol-gel film is non-responsive. This likely due to its low density as compared to the other films. However, both sputtered and PLD films showed only very small SAW transmission and only for the largest SAW wavelengths. This indicates poor SAW propagation on the thin-films, likely due to the many surface defects. Wet chemical etching of the ZnO thin-film between IDTs shows only a small improvement to transmission.

An exploration of the effect a thin 20 nm capping layer of sputtered SiO2 has on high frequency SAW propagation is shown in Chapter 4. The effect is studied on a lithium niobate (LiNbO3) substrate, which is a single-crystal material frequently used in industry for RF SAW filters. A VNA comparison is made for four SAW wavelengths and a substantial decrease in transmission power is seen for the capped LiNbO3 as compared to the bare one. The transmission decrease is quantified through a propagation loss analysis of delay lines with different lengths. It is shown that for the smallest wavelength of the propagation loss increases by 3 dB for the capped substrate. The effect is shown more clearly in the time domain analysis of the SAW transmission, where a more pronounced effect is also seen in the triple transit transmission of .

One of the effects contributing to poor SAW performance in the previous chapters is identified as the impedance mismatch between the IDT on the substrate and the RF power source, which is matched to 50 Ω. In Chapter 5 we numerically simulate the piezoelectric substrate used in previous chapters and apply it to an IDT equivalent circuit model for electrical impedance matching. It is found, that the IDTs used on the nano-imprint template are highly electrically and acoustically reflective due to their substantial length and corresponding high number of finger pairs. The IDT model results are compared to experimental VNA measurements in Chapters 3 and 4 and the model is found to be incomplete as it does not take into account the many reflections and resonances which occur within the fabricated devices. Nonetheless, the simulation and model are a useful tool for identifying potential IDT spurious responses and as a first approximation to minimize impedance mismatch.

The material origin of propagation loss can be mitigated by utilization of materials less susceptible to degradation during fabrication. Aluminum nitride (AlN) is a hard piezoelectric material with a high sound velocity (~ 10,000 ms-1), which is attractive for access to higher frequencies without the need for small wavelengths. In Chapter 6, a novel thin-film piezoelectric, Sc-doped AlN, is deposited on SiO2/Si and analyzed via SAWs generated with NIL defined delay lines. The thin-film SAW generation and propagation characteristics are analyzed via a VNA and compared to the piezoelectric materials described in the previous chapters. The SAW transmissions are found to be more powerful and robust than on ZnO multilayers, however the presence of spurious shear and bulk modes may be an impediment to successful application in acousto-electronic devices.

And finally, Chapter 7 gives an outlook into a new generation of silicon ACT devices using the knowledge and experience from the previous chapters of this thesis in their design. A new thin-film material combination and fabrication process flow is proposed to minimize damage to the piezoelectric thin-films used in potential new devices. Numerical simulation and the equivalent circuit model from chapter 5 are used to assess the ideal IDT length with the proposed new material structure. Additionally, alternate IDT designs are introduced for improved generation and propagation of high frequency SAWs with larger wavelength IDTs.

Due to the COVID-19 crisis measures the PhD defence of Róbert Ukropec will take place (partly) online in the presence of an invited audience.