T-shirt, casual pants, a pair of Birkenstock, knowledgeable smile, a certain degree of reticence. That was Gerhard Woeginger. A great mind, a compendium of knowledge in algorithmic methods in discrete mathematics and theoretical computer science, inspiration to so many colleagues and students since more than 30 years, passed away on Friday April 1. We are shocked.

Gerhard, born in 1964, finished a PhD on "Geometric clustering, Reconstruction and Embedding Problems: Combinatorial Properties and Algorithms" in 1991 at Graz University of Technology, under the supervision of Franz Rendl. In Austria. Known to some as the land of the kangaroos, as Gerhard liked to say. 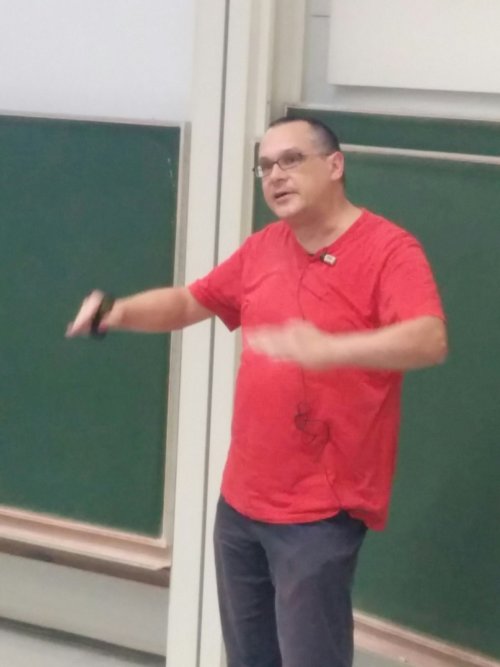 Gerhards scientific contributions are hard to summarize. He was broad. He was interested in all kinds of problems from many areas, but mostly algorithms of all flavours, be it exact, approximate or online. He was passionate for computational complexity at large, the line between easy and hard. He was looking for connections across fields. Last but not least, he published lots of papers on the computational complexity or algorithmic solutions of scheduling problems. Indeed, about sixty of his more than 300 publications are about scheduling.

His interest was authentic, infectious, and he was satisfied only when the work was done and the solution was elegant. And when it was done, he would show this mysterious smile that expressed both satisfaction but maybe also a certain degree of disrespect - because after all, it was not that difficult. The precise meaning of this smile of Gerhard's will remain his mystery.

He was also a teacher with a natural gift. Many of us have listened to his tantalizing research talks. He could make complicated things look simple and easy as no other. In that respect, he was a role model for many of us.

During workshops and conferences, of which he visited many, he also liked to socialize and hang out with friends. Above all, he was the one who introduced the "Mafia" social game to several communities, and he played it with passion until late night or early morning. On such an occasion, he could even get upset if people made unreasonable decisions. The game is indeed big fun. Without Gerhard, it will not be the same.

Gerhard will be missed for so much, and so many little things.