Our team from the Department Applied Mathematics UT, Applied Analysis (AA) group, in the SACS cluster has won the international carotid artery vessel wall segmentation challenge, as was announced at the SMRA conference on September 12th. The team consisted of three members from the Applied Analysis Group: Dieuwertje Alblas, Jelmer Wolterink and Christoph Brune.

Measurement of vessel wall thickness is an essential step in monitoring of patients suffering from hardened arteries (atherosclerosis). This disease is characterized by an accumulation of fat and cholesterol on the vessel walls, narrowing the artery and impeding the blood supply. Atherosclerosis frequently manifests itself in the carotid arteries, that supply the head and brain with blood. Manual measurement of vessel wall thickness is very time-consuming, therefore automizing this task would mean a breakthrough in patient management. To this extent, researchers at the University of Washington organized an international challenge[1], with the objective to detect and segment the arterial wall in medical images in the neck region automatically. The organizers released a training data set with MRA scans of the neck regions of 26 patients, with varying degrees of atherosclerosis and some annotations of the vessel walls. Using this data, participants could develop their methods. Submissions were evaluated by the challenge organizers on an unseen test set. The produced segmentations were graded using a weighted average of frequently used metrics in segmentation, reflecting the quality of segmentation performance. The final ranking was based on a qualitative score, where the segmentations were reviewed by a panel of expert radiologists.

The UT team, team Wall-E, was one of the ten participating teams. Dieuwertje presented their method at the SMRA conference last weekend. There it was announced that their submission ended first place in both quantitative and qualitative analysis! She will also present at MICCAI on October 1st. The developed method is at the interface of applied mathematics and medical image analysis and makes use of neural networks with baked-in anatomical prior knowledge. Based on these results, it can be stated that mathematics greatly contributes to accurate segmentations, and has a lot of potential in other clinical challenges. For Dieuwertje, this result is a great kick-off of her PhD project, that will focus on segmentation and analysis of aneurysms in the abdominal aorta. 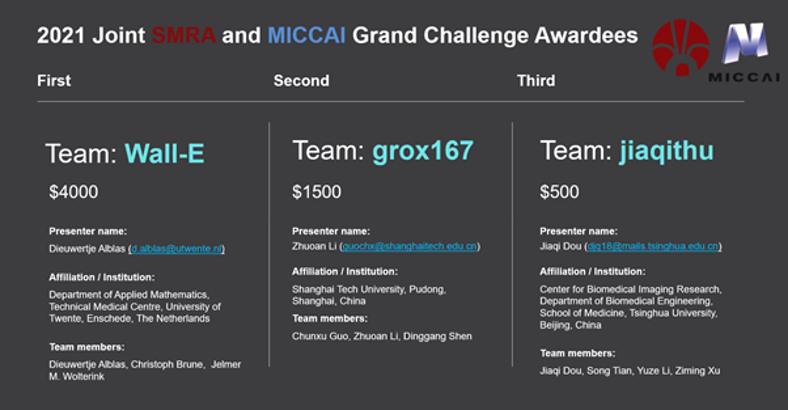