It is with deep sadness that we share the news that Fred van Houten passed away on 18 October at the age of 69. 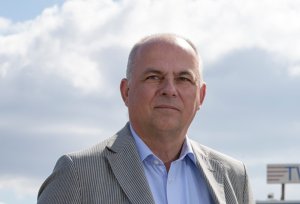 Professor van Houten was affiliated with the UT since 1978 and experienced many highs throughout the course of his long career. He was a founding father of the degree programme in Industrial Design Engineering (IDE) and held various senior positions at the UT for a long time. He was also the president of CIRP, one of the largest research organisations in his field, manufacturing technology. The 2017 opening of the Fraunhofer Project Center on Campus was his crowning achievement. Thanks to his large international network, including many close relationships with the German manufacturing industry, Van Houten was able to convince the Center to come to the University of Twente. As a member of the Top Team for the Twente Technology Base, Fred van Houten was also very close to the local smart industry.

On his retirement in 2017, stepping down as Professor of Design Engineering at the UT, Fred van Houten received the Erepenning, an honorary medal given to non-UT employees as a token for their great contributions to the university. It is truly exceptional for a UT employee to receive this award.

Van Houten said the following about the UT in his farewell lecture in 2017. ‘It has been a privilege to be able to work for the University of Twente. For 38.5 years, I came to work through the same door. I only moved 4 times and have had the honour of working with almost 200 department colleagues during my career. I have had 15 secretaries, 10 deans, 9 rectors, and 6 Executive Board presidents. I served on the faculty board for 19 years and was department head for 15. I was certainly productive during my time at the UT, getting more than 1,000 engineers (Mechanical Engineering and Industrial Design) and 45 PhD students ready for the future. And last but not least: I have been happily married to Coby, my UT colleague, for the past 33 years.’

Fred’s closest colleagues remember him as a man of tremendous energy with an unparalleled ability to answer major industry questions with the help of the UT, making him into an embodiment of what the UT stands for: having an impact on society.

Fred was a major source of inspiration for and the initiator of the degree programme in Industrial Design Engineering and the Fraunhofer Project Center (FPC), among other things. He held various senior positions at the UT and was also actively affiliated with the UT after his formal retirement. He remained fully committed until the end. Only three weeks ago, he played an important role in the FPC board meeting and attended a PhD graduation ceremony as a doctoral advisor two weeks ago. He never let anyone down.

Fred was a lover of music with an eclectic taste, listening to everything from pop and folk to classical music. He was a keen cook and a true gourmand. Together with Coby, he played his way across many golf courses in Europe and beyond. He was only too happy to use his extensive network for his department, the faculty, the university, and even the region. Fred never really said goodbye to his job and continued to work tirelessly after his retirement.

We are shocked and saddened by the death of Fred van Houten and we wish his wife, family, and friends much strength in coping with this enormous loss. It is also a great loss to science and the field of Design Engineering in particular. Fred leaves us with many lasting memories.