Gender-neutral language is preferred wherever possible.

Pronouns: they, them and their

The gender-neutral pronouns that are to be used are they, them and their, both referring to singular and plural nouns:

The use of a third-person plural pronoun referring to a singular noun was formerly perceived as grammatically incorrect, but is now widely used.

If the text clearly refers to a specific individual on a particular occasion, and you know the gender of the person concerned, you may use a gender-specific pronoun:

Otherwise, depending on the circumstances, consider the following FOUR alternatives:

1. When writing instructions, use the second person or the imperative:

Where possible draft in the plural; this is very common in English for general references:

Substitute ‘the’ or ‘that’ for the possessive pronoun:

This can be cumbersome and look excessively formal, but may be a useful technique in a longer sentence.

Microsoft Word has a nifty tool that can help you check a document for inclusiveness and gender-neutrality. What you need to do is: open your document - select File - select More - select Options - select Proofing - go to Writing Style, there find Grammar & Refinements and click the button for Settings. You will see a list of subjects with boxes you can tick. Go to the section named 'Inclusiveness', tick all boxes and then click 'OK' at the bottom: 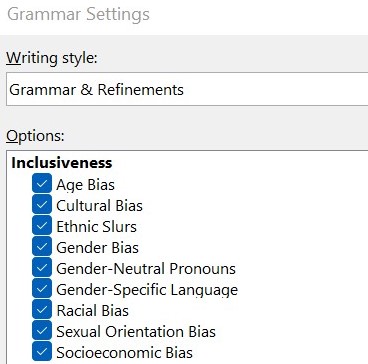 MS Word will now start checking your documents for inclusiveness. When a word is found to infringe on one of these categories, it will be underlined and a list of suggested alternatives will be provided, e.g. MS Word will suggest changing a word such as manpower into workforce.