Project: A direct comparison of exogenous and endogenous saccades and vergences

The aim of this study is to directly compare the cortical correlates of exogenous and endogenous vergences (eye movement in depth) and saccades. The following conditions were investigated: right saccades, left saccades, convergences, and divergences, all examined in a Go/NoGo paradigm. The setup with LEDs presented below was used to trigger eye movements. Each eye movement trial started with the onset of a fixation LED in the center (central LED C), which was followed by the onset of one of the lateral target LEDs in the go conditions. The first part of the experiment examined exogenous eye movements. The participants were instructed to make an eye movement from the fixation LED C to the target LED which appeared in a random order. In the second part of the experiment endogenous eye movements were investigated. Each trial started with the onset of the central white LED (LED C). Subsequently, all LEDs were switched on and then LED C turned green, red or blue and remained on together with all LEDs. The color of LED indicated which type of the eye movement or no movement is required.

Cortical activity (EEG) was measured from 64 active channels, and eye movements were recorded using electrooculography (EOG) from three bipolar electrodes to enable proper measurement of the onset of vergences. For our analyses, we plan to use the BESA (brain electrical source algorithm) method, which enables to describe ERPs by different cortical sources with different activity patterns over time. 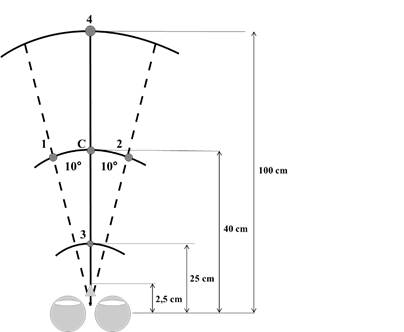