Do you remember the days when paying your bills meant using one of those printed bank payment slips? Nowadays, of course, you can transfer money to someone with just a few clicks of your mouse or a couple of taps on your mobile screen, but not so long ago we used to have to do everything on paper. At least, that was the case until the Twente Technical College developed the Technical University Multiprocessor, or ‘TUMULT’. 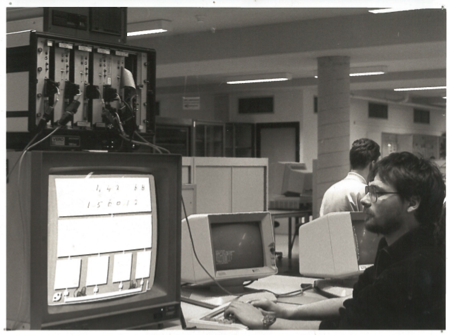 As the Volkskrant reported in 2014, the TUMULT – a true ‘child of the 1980s’ – acquired a somewhat mythical status. The application was completely new at that time, as Twente researcher Hans Scholten explained to us. Hans was involved in the development and construction of various versions of the TUMULT. ‘A multiprocessor was a completely new way for processors to communicate with each other.’

It all began with a request from the Dutch telecommunications company PTT for Twente’s Department of System Programming and Architecture (SPA) to help automate the processing of bank payment forms. A partnership was set up, based on an idea that the device should be no larger than the size of a sheet of A4 paper. In 1988, under the guidance of Professor Pierre Jansen, the Department teamed up with the Dr Neher Lab (a PTT research institute at the time) and the manufacturing firm Océ to develop a computer that would be able to read whatever people had scribbled or scrawled on all those payment slips. And so the TUMULT 16 was born, called that because it had 16 processors. ‘Pierre Jansen was the person who made sure that everything came together. He brought everyone in the group together to work on this,’ recalls Scholten. ‘In the end, there was a large group working on this project – as many as 15 people in its heyday.’

The TUMULT read the numbers on the form by flash-scanning them on a small belt, digitised the result, and compared these with up to 600 characteristics. In fact, it was not a single computer, but several computers that were able to perform multiple tasks quickly, which a single computer could not have done on its own (or not quickly enough). The computers contained memory cards of 4, 8 and 16 megabytes. What was impressive was the speed at which they could communicate with each other: the network could process up to 20 megabytes per second! And the first version of the TUMULT could process five payment forms per second.

Banks were very interested in the multiprocessor computer that had been put together, both nationally and internationally, but the team didn’t have the time or enough personnel to bring the innovation onto the market. ‘Scientifically and technically, it was an outstanding achievement and there was a lot of interest. We went to many conferences around the world and gave presentations about it in America, China and Japan, for example.’ The commercial version was eventually known as the ‘Transputer’, and it was based on the software used in the TUMULT and all the experience that had been gained during its development.

Well, all children grow up one day, and this ‘child of the 80s’ went on to have children of its own, because the achievements of the multiprocessor can still be found in today’s technological developments at University of Twente. The principles of the system can be seen in flexible networks, systems on chips and real-time computing chip systems. The computer has therefore been given pride of place in the Zilverling building, in the department where all the hard work on this impressive innovation was done. ‘There are still a lot of fond memories about those days, I think,’ explains Scholten. ‘So many people in the department worked together on that project. It was a close group, and it wasn't just about work. As well as all the effort that went into developing the new device, the whole group also went for a climbing weekend in Germany, among other things. We were a close-knit group.’ 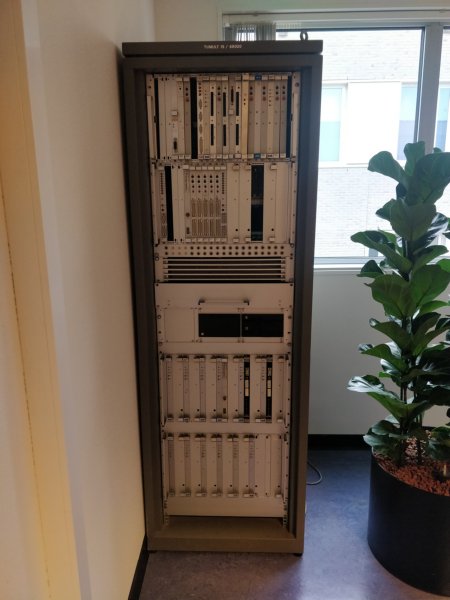