Professor David Reinhoudt, one quarter of the ‘Golden Quartet’

Professor emeritus David Reinhoudt is in good company: together with Nobel Prize winner Ben Feringa, Roeland Nolte and Bert Meijer, he forms what is known in supramolecular chemistry circles as the Gouden Kwartet (Golden Quartet).

David Reinhoudt arrived at the University of Twente in 1975, and from that time until his departure in 2007 his research focused on the link between chemistry and nanotechnology. In the early 1980s, his attention was drawn to a molecule that had the potential to make a difference to cancer research in the Netherlands. He sought out fellow professor Bob Pinedo, the first-ever medical oncologist (in Utrecht and later at VU Amsterdam). That was the start of a long and profitable working relationship. ‘Cancer research has always interested me,’ Reinhoudt explained in an interview with U-Today (newspaper of University of Twente). Over the course of several years, one result of his research was the development of the diagnostic nanopill under his former student (and current MESA+ Scientific Director) Albert van den Berg.

In 1999, Reinhoudt helped found the research institute for nanotechnology MESA+, marking a high point in his quest for ways to link chemistry and nanotechnology. Under his leadership, MESA+ grew to become a prestigious institute. Reinhoudt and his group were among the first researchers to build nanostructures by using supramolecular interactions to combine the various different components.

Reinhoudt’s efforts to develop his field of study were not limited to his work within the University of Twente. He also chaired the research and development initiative Nanoned, which he founded and in which the University of Twente took a leading role as official secretary. That was a full-time job, and he remained in that function until the age of 69. Even after he became professor emeritus, Reinhoudt didn’t stop working; first he was appointed part-time lecturer, then shortly afterwards he took on the post of lecturer in Applied Chemistry at Radboud University Nijmegen. And all this at 70 years old!

Given his passion and dedication, it’s no surprise that the professor received many honours during his long career, including a medal of honour from the University of Twente, honorary membership of the Royal Netherlands Chemical Society and various honorary doctorates from universities around the world. To this day, respected researchers at MESA+ continue to make advances in the field he pioneered: where chemistry meets nanotechnology. 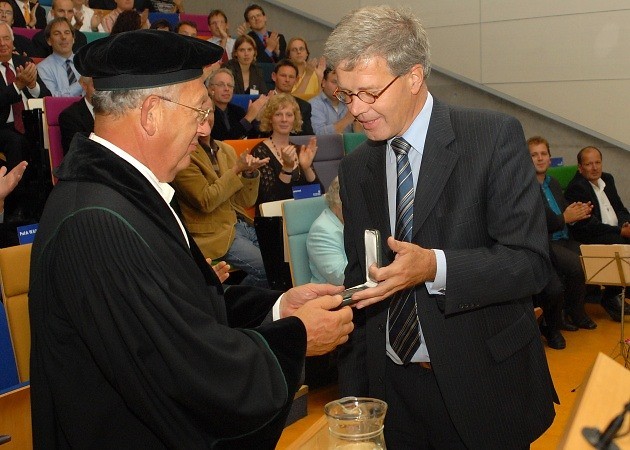