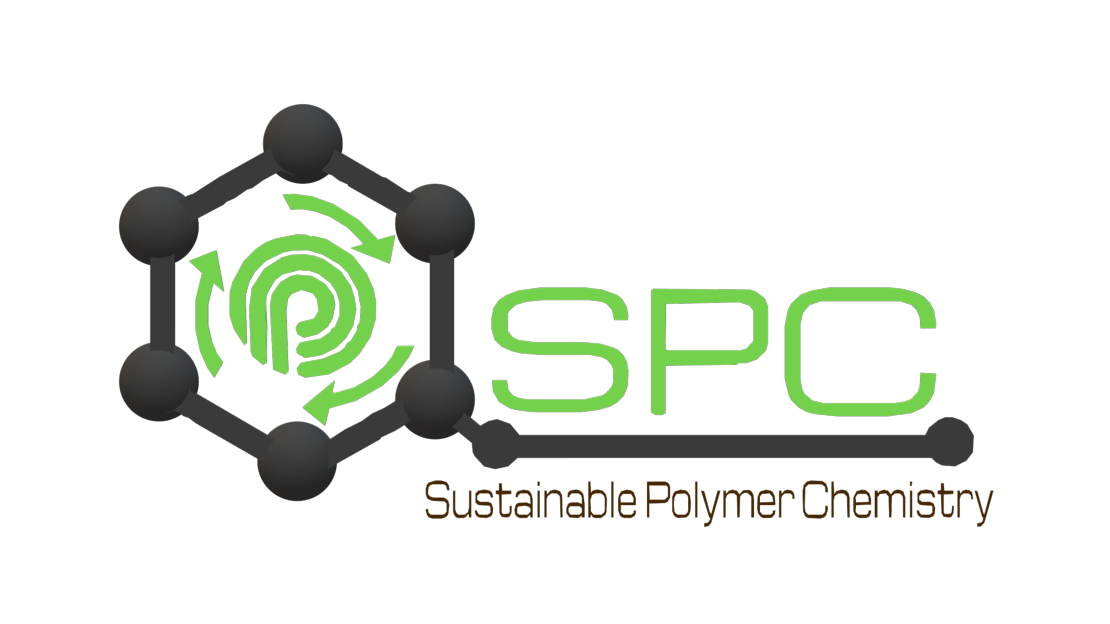 The “Sustainble Polymer Chemistry“ (SPC) group focusses on the development of novel synthesis strategies and polymeric materials to tackle different fundamental questions. The development of novel (bio)degradable materials, primarily based on phosphorus-containing polymers or biopolymers, such as starch or lignin, is a major research focus of the group. We combine modern organic and inorganic chemistry with precision polymer synthesis and colloidal formulations (miniemulsions, reactions at the interface, etc.) in order to produce smart materials for drug delivery, agriculture, adhesive technologies, flame retardants, and optics.

Inspired by DNA, a natural polyphosphodiester, my group has especially driven the development of phosphorus-containing polymers, i.e. polyphosphoesters (PPEs). With the natural phosphate building block, biodegradable and biomimetic PPEs can be synthesized by different strategies. We take the bridging element from DNA to materials science as the installation of the phosphate group into the polymer main chain allows installing diverse chemical functionalities, which eventually control the materials properties such as chemical reactivity, folding, self-assembly, or interactions (functionality, responsibility, degradation, blood interactions). Such PPEs can be used in diverse applications and have an industrial interest (e.g. as surfactants or flame retardants). By a living ring-opening polymerization of cyclic phosphoesters, we were able to prepare libraries of functional PPEs, which degrade on demand and carry functional groups to allow drug attachment, surface-immobilization (Polym. Chem. 2018), adhesive (Biomacromolecules 2017) or anti-fouling properties (Nat. Nano. 2016), or flame-retardant properties (Polym. Chem. 2014). The class of PPEs has emerged in the last decade to a powerful polymer class for various applications and due to the versatility of its chemistry, it certainly will find applications in diverse areas of research and industry. We further developed a reliable protocol for the preparation of hydrophobic polyphosphoesters allowing the large-scale preparation of phosphate-based flame-retardants by engineering the chemical structure, we control the degradation during a fire event (collaboration project with BAM (Prof. Schartel)) (Polym. Chem. 2014, Angew. Chem. 2018).

In addition, smart polymers (with LCST and UCST) are accessible from PPEs (Polym. Chem. 2017). For example, amphiphilic polyphosphonate block copolymers carrying hydrogen-bonding motifs allowed us to assemble stimuli-responsive polymersomes, which can be reversibly opened and closed by a temperature trigger (J. Am. Chem. Soc. 2017). Such vesicles are a first step towards the development of compartmentalized reactors on the nano- or microscale that can release reagents. The overall hydrophilicity controls the interactions with blood proteins (Angew. Chem. 2018). Such materials have led to the unraveling of the “stealth effect” of nanocarriers that is an underlying principle for drug delivery (in collaboration with Universitätsmedizin Mainz) (Nat. Nano. 2016, Biomaterials 2015 & 2017). Nanocarriers, coated with hydrophilic PPEs exhibit a “stealth” effect, similar to the well-known poly(ethylene glycol), rendering them as perfect biodegradable alternatives, especially for chronical diseases. 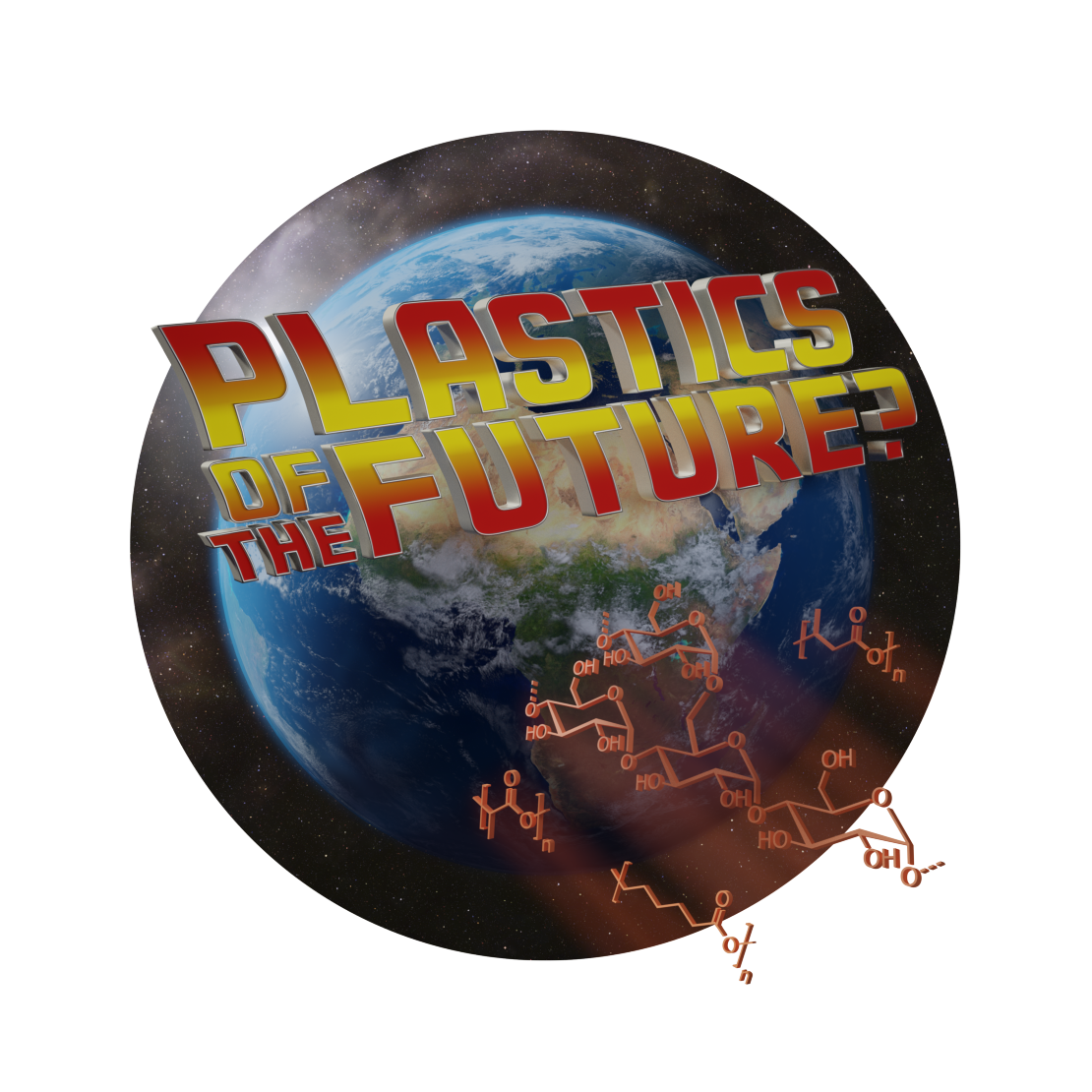 We live in a polymer age – our modern life is shaped by polymers every day. From food packaging to high-tech polymers in our laptops or cars, synthetic macromolecules surround us.

Research in the “SPC” Group is driven by the molecular design of (bio)degradable polymers – both fully synthetic or based on modified biopolymers.

We design biodegradable nanocarriers, i.e. nanoscopic packaging, of drugs, which we use together with the Uniclinics or the Biology department in Mainz for drug delivery – into cells for the treatment of human diseases, but also as targeted drug delivery inside of plants. The latter project especially targets the treatment of the grapevine trunk disease “Esca” – a deadly fungal disease that does not have a cure to date. We have developed a reliable protocol, based on modified wood-components, that entrap a fungicide and allow a direct transport inside of a living plant and to treat the disease at the place of action – such a nanocarrier-mediated drug delivery for plants will reduce the amounts of pesticides which are sprayed on the fields in the agriculture in general.

Fully synthetic polyethylene-mimics are another major topic in this research area. We design monomers with breaking points, e.g. phosphoesters or orthoesters, that undergo hydrolysis or enzymatic cleavage under certain conditions. These very hydrophobic polymers might be able to replace the non-biodegradable polyethylene is certain applications as they ensure complete degradation. Further information can be found via the link of the interdisciplinary project “PlastX”.

Besides research on novel biodegradable polymers, we also conduct studies about commodity plastics and packaging. The results are published together with the PlastX workgroup (see external link). Shorter stories about plastics and packaging are currently published online via the institute’s Twitter account and cover for example explanations about “To Go”-products or biodegradable waste bags for organic waste. In a recent article (Haider et al. Angew. Chem 2019), we discuss the term “biodegradability” – and compare test methods from the lab to real-life applications that concern biodegradability of plastics and polymers. 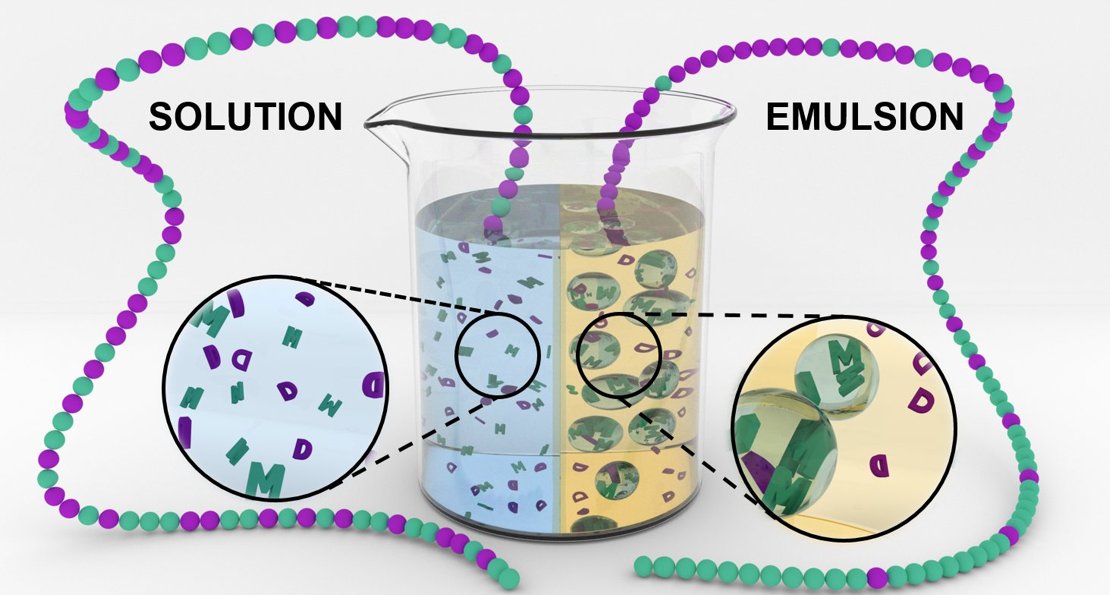 In contrast to solid-supported synthetic strategies, our approach allows us to prepare sophisticated macromolecules on a large scale with high structural precision. The monomer design controls the reactivity.

A synthetic platform to realize such sequenced copolymers was established in the SPC in recent years: the living anionic polymerization of aziridines. Aziridines were missing in the monomer family for anionic polymerization and access to well-defined polyamine structures or copolymers with styrenes or epoxides are challenging or even impossible to prepare. Aziridine, or ethylene imine, is produced industrially and polymerized only by uncontrolled cationic polymerization. It has a plethora of applications, ranging from chelator, wastewater treatment to gene transfection. The combination of such building blocks with other industrially relevant materials would be desirable to prepare novel materials with unprecedented properties. However, controlled synthesis of linear or branched poly(ethylene imine) (PEI) from aziridine had been missing. The only way for preparing linear PEI is the detour via oxazoline chemistry and subsequent hydrolysis. We established a novel monomer family for the living anionic polymerization, namely activated aziridines. By activation of the aziridine-ring with sulfonamides to allow nucleophilic ring opening, a variety of novel monomers and polymers becomes available. More importantly, base-initiated polymerization proceeds via a “living” mechanism, allowing the formation of polymer architectures or combination with other monomer types. We were able to introduce several chemical functions into the polyaziridines, either in the activating group or as a pendant chain. Removal of the activating group, if desired, is possible by several methods to prepare polyamines which were not accessible so far.

The activating group can do more: by adjustment of the electron-withdrawing effect, the sulfonamide finely tunes the monomer reactivity and controls the synthetic primary structure. This allowed us to prepare sequence-controlled copolymers by a competing anionic polymerization of up to 5 different monomers in a one-pot and one-shot reaction (Macromol. Rapid Comm. 2016). This will allow us to prepare functional materials mimicking the primary structure of proteins and allow folding into hierarchical assemblies. In addition, chirality is currently installed into such synthetic primary structures to further control the chirality of the folding. The combination of aziridine chemistry with epoxides allowed us to prepare amphiphilic multi-block copolymers.

Compartmentalization is another handle to control the synthetic primary structure: By confining a copolymerization to nanodroplets in an emulsion, an ideal (random) copolymerization is forced into gradient copolymers. Polymerization began only inside the droplets. As that compound was gradually consumed, the change in concentration pulled ever-greater amounts of the other ingredient into the chains, creating a gradient effect.