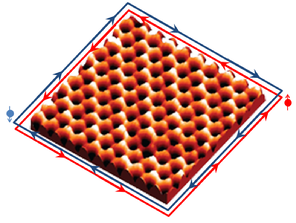 Scanning tunneling microscopy image of the buckled honeycomb lattice of germanene with an artist’s impression of the quantum spin Hall effect.

Schematic diagram of the effect of an external electric field on the electronic structure near the Dirac point.

Recently we studied the growth of graphene, silicene and germanene and we reported the experimental observation of a Dirac signature in germanene. A topical review on germanene can be found here.