Matrix-Assisted Laser Desorption Ionization Mass Specrometry (MALDI-MS) is one of the leading tools in analytical chemistry and biomedical research for the identification of organic molecules in general and in particular for the identification of bacteria and pathogen infections in medical hospitals. MALDI is a so-called soft ionization technique, in which the analyte of interest that was previously deposited onto a target plate is vaporized and ionized by irradiation with a short UV laser pulse before entering a time-of-flight mass spectrometer. One of the main benefits of MALDI-MS (e.g. compared to LC-MS) is its easy of use and high throughput capability, which makes it suitable for screening applications of large data and sample bases. Yet, MALDI-MS suffers from challenges regarding sensitivity and spot-to-spot reproducibility. The problems largely arise during the sample preparation. The standard sample preparation procedure involves the deposition of a drop of analyte that is dissolved together with a UV absorbing “matrix” material, typically an organic salt. Subsequently, the solvent is left to evaporate and the remaining dried residue is inserted into the MALDI-spectrometer. However, the evaporation of complex fluids such as solutions of organic macromolecules or suspensions of particles is usually affected by the so-called coffee stain effect. The coffee stain effect leads – as is well known from daily experience at the coffee table – to a very heterogeneous distribution of the dried residue after completion of the evaporation process. As a consequence, the MALDI-MS signal depends very strongly on the position of the irradiating laser pulse within the dried coffee spot.

The coffee stain effect is caused by a combination of evaporation and contact line pinning, which give rise to internal flow patterns within the drop that transport solutes toward the contact line, where they eventually precipitate. Circumventing these heterogeneous deposition patterns is of outmost importance in many drop-based deposition processes (DNA and protein microarrays; inkjet printing – 3D printing – electronic printing) including MALDI-MS. Electrowetting is able to generate intensive flow fields inside sessile drops, as we studied several years ago in the context of microfluidic mixing (Mugele et al. Appl. Phys. Lett. 2006; Lab Chip 2010). The electrowetting-induced flow patterns are much stronger than the evaporation-driven ones that give rise to the coffee stain effect. Hence, electrowetting can be used to suppress coffee stain formation (see Eral et al. Soft Matter 2011 and Research Highlight Coffee Stain Suppression).

The same technique can also be applied during drying of sample drops in MALDI-MS. The better localization of matrix and analyte material in a small single spot leads to a more than 10x higher intensity and to a substantially reduced heterogeneity of the MALDI-MS signal. The proprietary electrowetting-based sample preparation technology “eMALDI” is currently being commercialized by the spin-off company eMALDI B.V. in Enschede. 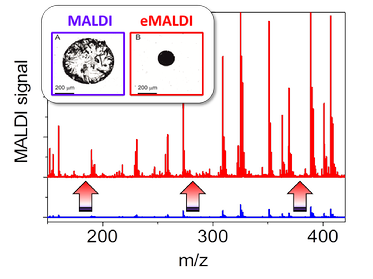