The recovery of crude oil from geological reservoirs is a complex process that bridges multiple length scales. In standard water flooding oil recovery, water, typically sea-water is injected on a macroscopic scale into the oil-carrying rock layers to push the oil from these injection wells towards a production well, where the oil is produced. On the microscopic scale the injected water displaces the oil in the porous reservoir rock in a typical microfluidic two-phase flow of oil and water. Due to the large surface-to-volume ratio, the efficiency of this microfluidic displacement depends strongly on the wettability of the surrounding porous rock matrix. The rock material, typically either sandstone or limestone, is made of intrinsically hydrophilic material. Yet, throughout millions of years of exposure to crude oil, a layer of organic material adsorbed onto the surfaces and thereby rendered the rock more hydrophobic. These molecular scale adsorption processes thereby hinder the displacement of oil by water in the hydrophobized pores of the rock. This is believed to be one of the major causes, why standard oil recovery is a rather inefficient process that leaves more than 50% of the oil unrecovered in the reservoir. 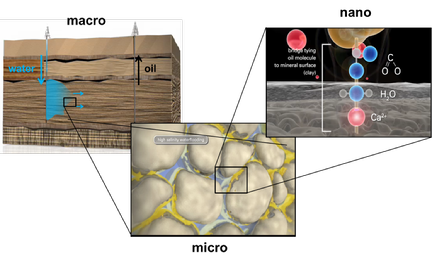 Since the 1970s oil companies have explored various procedures to improve this low recovery rate by injecting various types of additives together with the water. More recently, it was discovered that the recovery rate can also be increased by desalinating the sea-water before injecting it into the ground. Together with the oil company BP and partners from the Max Planck Institute for Dynamics and Selforganization in Göttingen and from the Nanogeoscience Center at Copenhagen University, we have been exploring for several years the microscopic origin of this so-called Low-Salinity water flooding process. Empirical research at BP had established that it is particularly relevant to remove divalent cations such as Mg2+ and Ca2+ from the sea water. Our research demonstrated that these cations have a strong propensity to adsorb to the silica and clay surfaces that are abundant in sandstone reservoirs. By adsorbing to these surfaces, the cations reverse the surface charge and make the rock surface more ‘adhesive’ to oil: polar oil components such as fatty acids can bind to the rock surfaces by an ion-bridging mechanism. By removing the divalent cations from the injection water (while also decreasing the overall salinity), surface-bound polar oil components are released and the rock becomes more hydrophilic. As a consequence, the efficiency of the recovery process is enhanced.

Highlights of this research include the atomically resolved imaging of adsorbed divalent cations on gibbsite and other clay nano-particles by high-resolution AFM imaging and the simultaneous colloidal scale characterization of local surface charges based by AFM spectroscopy. The observed patterns of adsorbed cations layers could be reproduced quantitatively in Density Functional Theory calculations by our partners from Copenhagen (see Siretanu, Ebeling, et al. Sci. Reps. 2014 and Research Highlight Ion adsorption). Moreover, we could demonstrate that the adsorption of divalent cations can lead to a charge reversal of the solid-electrolyte interfaces. The latter reverses the sign of the disjoining pressure and gives rise to a macroscopically observable wetting transition in well-defined mica-decane-electrolyte systems (see Mugele et al. Sci. Reps. 2015 and Research Highlight Ion Adsorption-Induced Wetting Transition).

These activities became the core of a recently started interdisciplinary (Chemical) Industrial Partnership Program between the physics and the chemistry branches of the Dutch Science Foundation, NWO-CW and FOM, BP, the PCF group in Twente and other academic partners at the Radboud University (Nijmegen), Utrecht University, the AMOLF research institute in Amsterdam and the Lawrence Berkeley National Laboratory (Berkeley, USA). With this new program, we will address fundamental aspects of the (co-)adsorption of ions and organic species with an even broader spectrum of experimental techniques including x-ray surface diffraction, x-ray absorption spectroscopy, (non-linear) optical spectroscopy, and numerical simulations.