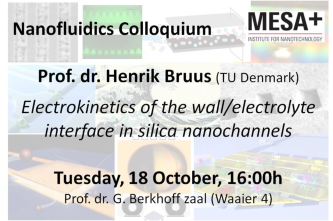 Electrokinetics of the wall/electrolyte interface in silica nanochannels

Silica nanochannels filled with electrolytes are fundamental components in contemporary bionanofluidics, but despite the apparent simplicity of such systems, it is a challenge to develop a theoretical description of them with predictive power. In the talk is presented a combined theoretical and experimental analysis of the solid-liquid interface of fused silica nanochannels with and without a hydrophilic cyanosilane coating [1,2,3]. Our theoretical model consists of three parts: (i) a chemical equilibrium model of the bare or coated wall, (ii) a chemical equilibrium model of the buffered bulk electrolyte, and (iii) a self-consistent Gouy–Chapman–Stern triple-layer model of the electrochemical double layer coupling these two equilibrium models. To validate our model, we compare it to nanoflow experiments involving pH-sensitive dye-based capillary filling , electro-osmotic current-monitoring, and pressure-driven streaming currents. At the end of the talk more recent applications of the model are touched upon, including the impact of local chemical surface-charge reactions on the ionic transport through permselective membranes. This work involves an analysis of a novel mechanism for the classical overlimiting current and model for desalination.

Prof. Henrik Bruus received his B.Sc. in mathematics and physics from the University of Copenhagen in 1984 and his M.Sc. and Ph.D. degrees in physics from the Niels Bohr Institute, University of Copenhagen in 1986 and 1990, respectively. He was post­doctoral fellow at Nordic Institute of Theoretical Physics 1990-92, Yale University 1992-94 and CNRS Grenoble 1994-96. He returned to the Niels Bohr Institute as an associate professor 1997-2001, before he joined the faculty at DTU Nanotech, Technical Univer­sity of Denmark in 2002. He was promoted full professor there in 2005. He has (co)au­thor­ed more than 100 peer-reviewed journal papers on condensed matter physics and microfluidics, as well as 120 conference contributions and 2 mono­graphs, the latest being "Theoretical Microfluidics", Oxford University Press (2008).