Next generation MALDI-MS detection through Electrowetting

H.Burak Eral and Dileep Mampallil (now in Nano-Ionics group) of the Physics of Complex Fluid Group are awarded an STW Valorisation Grant for exploring the commercialization of a substantial improvement of a workhorse method in analytical chemistry: Matrix assisted laser adsorption Ionization mass spectroscopy for short MALDI-MS. MALDI-MS is one of the most powerful methods in detecting various biological molecules such as proteins and other biological polymers. Despite its popularity, efficiency of MALDI-MS suffers from heterogeneous residue formation during sample preparation step so called coffee stains effect (see the blue box in figure 1 ). The heterogeneous distribution of analyte hampers the efficiency of the MALDI-MS . In e-MALDI, the new method developed by Eral and colleagues, electrowetting is used to eliminate the undesired heterogeneous patterns to achieve homogeneous distribution of biomolecules of interest for the MALDI-MS (see the red box in Figure 1). e-MALDI not only enhances the detection limits by boosting the signal-to-noise ratio but also makes the detection process faster. The researchers are currently working with Prof. H.Gardeniers to apply to method to biological macromolecules relevant for Alzheimer’s and certain forms of cancer.

e-MALDI, the new method developed in PCF group, is a sample preparation method based on electrowetting that eliminates the undesired heterogeneous patterns and thereby boosts the signal-to-noise ratio of MALDI-MS by more than an order of magnitude. Together with Prof. H. Gardeniers the researchers demonstrate the applicability of the method for various biological macromolecules.

Video of the Supression of coffee stain with Electrowetting 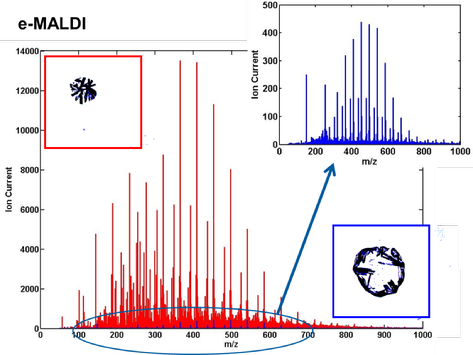 Figure 1 eMALDI in action. The blue signal comes from the conventional MALDI-MS detection of a common polymer. The sample prior to detection is given in blue box. If the e-MALDI technique is used. The sample is distributed as a homogeneous spot given in red box also the signal is boasted by 20 times.